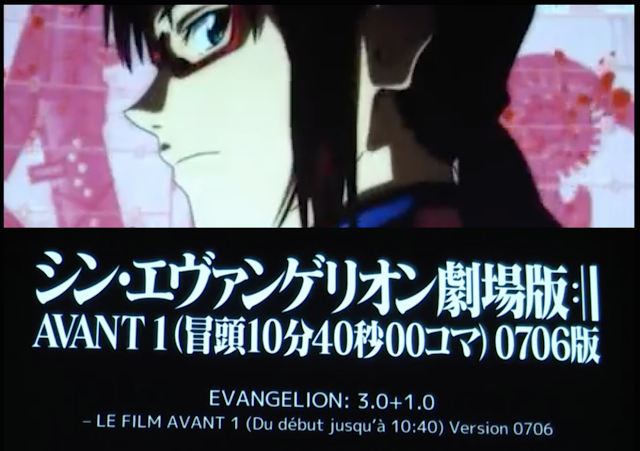 Witness the first 10 minutes and 40 seconds of Evangelion 3.0+1.0, screened at the recent "Yoko TAKAHASHI x EVANGELION STAGE" event held in Paris, for Japan Expo 2019 (*Watch online here the full stage performance before the screening). Folks and fans have also been referring this film as "Shin Evangelion" or "Shin EVA", as the director Hideaki Anno side-stepped to do the live-action "Shin Godzilla" film!


The video recording off screen (featuring sweet visuals but crap audio, but tis fine as I cannot understand Japanese language nor able to read French :p) featured a wrap-up to the first three EVA films, with new footage starting from the "4:10 mark" (Some of which we had seen earlier) = made me hella excited and eyes brimming with tears of joy, this fine Sunday morning, I sh*t you naught! I'd not describe the scenes as much as you can view them yourselves ~ ENJOY!


The iconic Eiffel Tower - used as a "weapon" in the released footage, is also used as a new poster-image for the long awaited and highly anticipated animation film (seen in two versions posted below). "Evangelion: 3.0+1.0 (Japanese: シン・エヴァンゲリオン劇場版: || Hepburn: Shin Evangerion Gekijōban:||) is an upcoming Japanese animated science fiction film directed by Hideaki Anno and produced by Studio Khara. It is the fourth and final film in the Rebuild of Evangelion tetralogy, based on the anime series Neon Genesis Evangelion. Originally expected for release in 2015, the film was indefinitely delayed due to Anno's involvement with the 2016 film Shin Godzilla. Production resumed after the production of Shin Godzilla ended in late 2016. The film is scheduled for release in 2020." (Wiki / evangelion.co.jp)