”Aggretsuko is a cute Red Panda, working as an office associate in the accounting department of a highly respected trading company. She works in one of the biggest metropolitan areas of Tokyo.

It’s always been a dream of Aggretsuko to work as an accountant, especially in this part of the city. But in reality, her bosses are unsympathetic and give her harsh deadlines. She ultimately has become a pushover within the company. When she gets pushed to the limit, she goes out after work and takes out her frustration and stress with heavy metal Karaoke sessions!"

Aggretsuko joins Hello Kitty, My Melody, Bad Badtz-Mru and Kero Kero Keroppi, and of course Gudetama of Sanrio's stable of characters - with this particular female-animal themed specifically to a counterpart in the “real world”! Wearing her blue O.L. suit (*Office Lady) and brandishing “Rock-On” hand-signs, Aggretsuko as well wears her “KISS”-Gene Simmons-styled face make-up with aplomb!


Aggretsuko had been the main character in the anime titled “AGGRESSIVE RETSUKO” (thanks for the headsup Antonio Capillo) for well over a year now (some episodes posted here, while many more are available to view on youtube :p).

As well Aggretsuko has already gained “consumer life” in Japan, at the very least in these gacha keychain chains released “a few months ago”! (Pic courtesy of Linda Le AKA VampyBiteMe). You can even imagine her one-raised-leg (in the top gacha) resting on the table in the karaoke, while the other hand holds a microphone, as she ROCKS the room hahahahaha 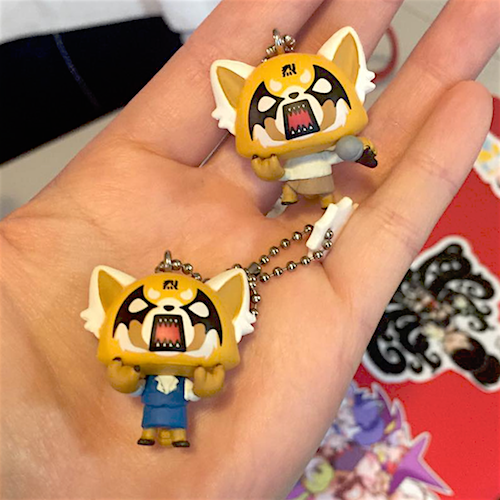 An interesting character creation, no doubt in reaction to the sign of modern times - a character the masses of working Japanese folks could identify with? Will Aggretsuko be the “Hello Kitty” of THIS generation? Do YOU think she has what it takes, for “Pop Culture Immortality”, beyond the Realms of Kawaii-dom? :)