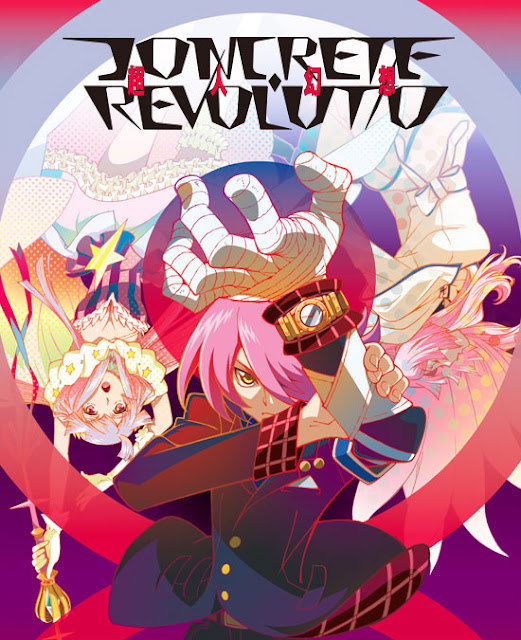 PLOT: "In the year Apotheosis 41, Earth is currently home to superhumans and paranormal phenomena of all kinds, from aliens and magical girls to ghosts and transforming robots. However, official knowledge of these beings is officially kept under wraps by the governments of the world. The Japanese government has quietly set up the "Super Population Research Laboratory," or the "Superhuman Bureau," to keep track of all superhuman beings in the country and eliminate them if they pose a threat to humanity. In the present, Bureau member Jiro Hitoyoshi finds himself recruiting new superhumans for the Bureau in the course of his job. However, five years later in Apotheosis 46, Jiro turns into a vigilante on the run from the Bureau while the rest of its members deal with the consequences of their earlier actions." (Wiki)

A super-powered being who drives a super car that can transform into a quadrupedal mech named "Equus" ("Jiro Hitoyoshi"), a magical "witch" girl ("Kikko Hoshino" / transformation seen below :p), a ghost child who can change shape at will ("Fuurouta"), an android detective ("Raito Shiba") - and these are just some of the folks who make up the "Superhuman Bureau" = an entity that protects superhuman!

Reminds me of "Libra" in Kekkai Sensen / Blood Blockade Battlefront, and I like that! I've always liked group / team dynamics in fiction - from comicbooks to animation - so this is a natural shoo-in for FUN, for me personally, anyways :)

Episode #1 saw Jiro enlisting the help of Kikko to thwart the scheme of an alien, who turned out to be the "S Planeterian"- who in turn can super-size enlarge to skyscraper height, and fights another giant alien "Grosse Augen", and I was thoroughly chambered by the multiple of genre influences seen in this original anime, not necessarily rooted in "manga adaptations".


I am enjoying what I see here, and the overall design feels like it includes "print" aesthetics with screen popping colors, giving it a refreshing "new" look to anime, and I look forward to gobbling up the rest of the series - which as of this is post is 13eps strong!

One look at the anime's official website @ concreterevolutio.com and imagine the imagery transplanted unto the anime!

I'd watched this on Daisuki.net, where it is free to view in Singapore! WHOO-HOO!

Group of Superhumans protecting Superhumans in #ConcreteRevolutio #anime - reminding me of "Libra" in #kekkaisensen - and I like that! #animewatch #inototaku #watched Ep1