#watched: Ghost In The Shell: The New Movie

I personally measure and compare all GHOST IN THE SHELL anime against the 1995 feature, which might seen "unfair" to all animated projects that come after it, but that is the basis in which my viewing "satisfaction" are based on. From the various incarnations and permutations after - including the sequel feature "Innocence", to the "Stand Alone Complex" series, to the recent "ARISE" films, and in turn adaptation into the tv series "Alternative Architecture" - frankly, nothing seemed to be able to "measure up" to the wonderment and excitement I had felt over the 1995 "original", of the memory I had/still have of it … but that's just me.

The coined term "cyberpunk" seemed more relevant to the 1995 film, which had provided a more gritty look, while adding the aspect of "punk" to the "cyber", while subsequent projects seemed to dwell somewhat more on the "cyber" aspect, IMHO. But to be fair, the prequels in ARISE might still be showing the "shiny new skyscrapers" before mass commercialization turns it into shit…?

That said, I had liked how ARISE and subsequently Alternative Architecture had attempted a "prequel" concept, which while enjoyable, was pretty dense and exceptionally more "talky" than I am used to (but then again, I did not devour as much Stand Alone Complex" as much, truth be told) … but thankful, the latest GHOST IN THE SHELL: THE NEW MOVIE was not as much, but perhaps all that needed was to extrapolate and wrap up what has gone on before in the four movies in ARISE, and the additional 2 x episodes on AA, which left this movie with plenty of action, and I welcomed it!

And oh, the ACTION was exceptional! More satisfying that it has been for a while, and that alone is a delightful and refreshing surprise and development. It was as if previous ARISE projects were a test bed for this particular feature to further showcase that they had built up from before LOL

The animation here was exceptional and tight, tighter than ARISE and the tv series could offer - visually more cohesive and consistent, and as well action fluidity was engrossing. Makes for much more visual spectacle as a big screen offering, IMHO - even though I had watched this film online via my 17" laptop screen. The cinematic aspect was evident, and my kudos all around to the filmmakers and animators!

PREMISE: "Set after the events of Arise, the film involves the assassination of the Prime Minister of Japan which is publicly described as the "greatest event since the war". It is up to Public Security Section 9, led by Major Motoko Kusanagi, to discover the true nature of the murder. They are aided by the Prime Minister's son, Osamu Fujimoto." (Wiki)

Story-wise, it touched on more "human" aspects that stand out from the android cyber-future which had both fascinated and alienated folks such as myself all these time, bring mortality and human flaws back again to the forefront, which is one of the hall-marks of this concept.

That said, if one has not seen the previous ARISE movies nor AA tv series, you might have a tough time catching up to the story and character references.

Was it a cinematic story? Hardly, as in reality it was as the description above had mentioned, it served to tie up the series before. But perhaps seen as an entire movie series ( 4x ARISE + this film), this would be as satisfying a series, IMHO.

All that is said and done, what warmed my heart was the ending scene, which was essentially an updated sequence which parallels the opening scene/sequence in the 1995 animated film (embedded in full below), bringing everything back full circle to the end of the ARISE prequels, and I truly appreciate the nod.

After looking for the gratification of viewing the '95-edition of GITS, now I am brought back to it with the new, and perhaps that is well worth the journey I did not know I was looking for, instead of a single feature anime. Kudos, indeed.


Is this the end of the GITS series? Would there be more stories to tell, of Major Motoko Kusanagi? Her crew of "parts"? (I LOVED that as a reference, btw) … I do not necessary doubt so, nor yearn to learn more, at this point in time, but welcome it if they yet again appear. 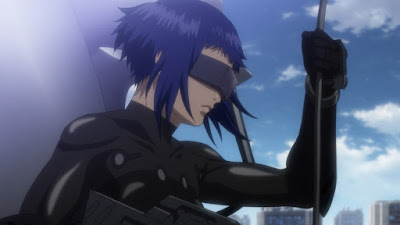 Ghost In the Shell video watched