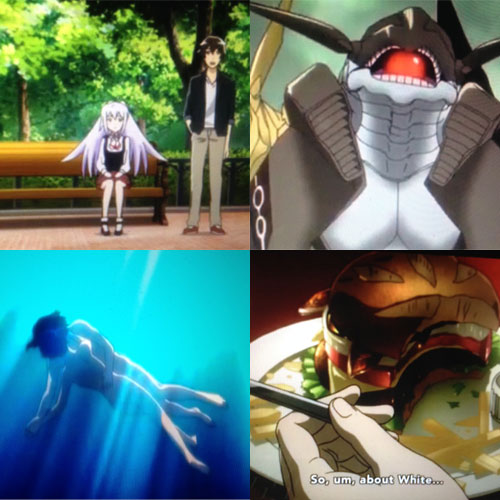 Literal screen-snaps of the anime(s) I caught on Sunday May 17th, which may or may not become a weekly thing, instead of featuring single anime I watched, I'd summarize them at a single go :)

#watched: I have become so impatient that the ending to this week's episode left me hankering to find out what happened! That's what you get for binge-watching the eps before and expecting fast resolution to scenarios LOL

Nevertheless some decent action in this ep, with Osamu utilizing his brain of his for something exciting, but alas the putz in him could't help Chika more than he is able to, which frankly irritated me more than an anime should, methinks … :p

#Sundayanimetrip continues with Ep.7 of #PlasticMemories ... Where Tsukasa fights Isla over who does laundry? LOL #anime

#atched: 7 episodes in, I am surprised I had stayed thus far long into this anime, where it is of a genre that I would not have attempted to even watch in regular instances. And I have since found it to be pretty sweet, with a tinge of dread hanging in the air, about Isla's inevitable "future", and even of rooting for Tsukasa's dedication and determination.

And I find myself smiling at Tsukasa sharing his desire to date Isla with his male collegues, and the girls worrying for Isla's date! Looks like I'll be continuing with Plastic Memories, as a sort of buffer-break to all the high-octane action anime I am following now haha

My third #anime for #Sundayanimetrip is Ep.7 of #KekkaiSensen - my current fav! Leonardo shares a meal with Black and they talk about White ... Amidst the insane situations and fights, this anime has loads more feels than anyone would expect in a genre concept such as this, IMHO.

#watched: Kekkai Sensen / Blood Blockade Battlefront is my current fav - not just for it's influences, themes and concept, but as well the "heart" in many of the episodes thus far, this being only the 7th. The convo between Leonardo and Black at the diner about their sisters was a very nice touch in sharing … how their relationship turns out would no doubt be a heart-churner in eps to come, methinks.

Klaus bareknuckle brawling at e-den turned out to be the sideshow to Leo and Black, for me anyways.

Will totally wait for this show weekly with plausible patience heehee

4th and final #Sundayanimetrip is Ep.7 of #ARISEAlternativeArchitecture - nothing like cyber action to round of the night and techno chill jazz as my lullaby to a long week passed :)

#watched: I keep ARISE: Alternative Architecture as the last watch for the night, as I want to be able to chill down from the excitement of BBB and somewhat lull myself to the soundtrack, to hopefully a fulfilling night of anime-watching and comforting sleep … and knowing what happens in this anime (the eps are re-edited from the previously 4 x ARISE films, which I have already watched ;p), keeps me from being impatient for finding out what happens "next" LOL

But being re-cut for a weekly tv format alo brings it's own "surprise" and a nice reminder of what I had watched before, I reckon … and of course being a fan of the old skool "Ghost n The Shell" keeps me constantly back for more, regardless of how good, or bad it is LOL