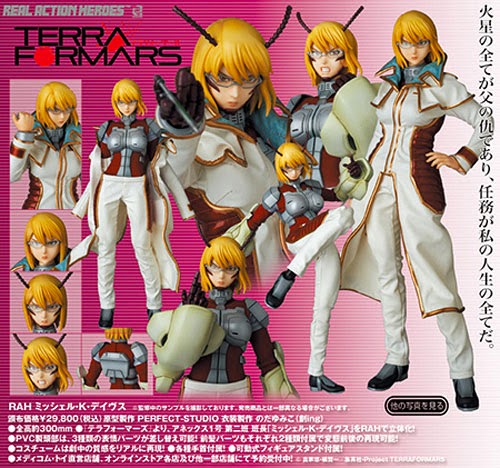 Scheduled for a December 2015 release, is the first RAH ("Real Action Hero") 1/6 figure release from anime/manga (Project) TERRAFORMARS, with "Michelle K. Davis"! With a SRP of ￥29,800 per, do check in with you fav retailer(s) for availability.

WHO-IS: "(Michelle K. Davis is) The American leader of the Annex I expedition, Michelle is the daughter of Donatello K. Davis, one of the victims of the BUGS 2 expedition and granddaughter of M. K. Davis, the executive responsible for the BUGS 1 mission. Like Akari, she is the daughter of a subject of the Bug Procedure, which gives Michelle the same powers her father had, that of the Paraponera. It gives her formidable strength and durability allowing her to sustain hits from the roaches and crush them easily. After receiving her M.O. Operation Michelle gained the powers of the Blast Ant, that give her the ability of exploding her enemies after a couple seconds like a bomb. While facing the Terraformar with her father's powers, she uses her personal battle weapons: six jet propellants (one for each elbow, one for each foot, and two in her back) that makes her incredibly fast and greatly enhances the impact of her blows." (Wiki)