MY TOP TEN FAV ANIME THEME SONG #2: "Crowds" by WHITE ASH was used as the opening song for GATCHAMAN CROWD, and is the only other reason why my memory of the anime remains untainted 100%. I tried to give the anime a chance, but by the end of the first season, I was disappointed and infuriated actually … but the song - with it's splendid base hook - never disappointed.


GATCHAMAN CROWD - was to me as well, a wasted opportunity for toys, especially the awesome that could have been had with the characters' mecha-armored forms be made action figures by S.H.Figuarts ala "Tiger & Bunny" (which I personally collect and adore). But I guess one forgettable season maketh not memorable action figures ... maybe when the second season makes more converts?

What to look out for instead, are "Ichinose Hajime" and "Utsu-tsu" as Nendoroids by Phat! Company. So far this is the only image of the graphic circulating in the www (Pic via nendo-ko) - hopefully we'll get to see them toys soon! 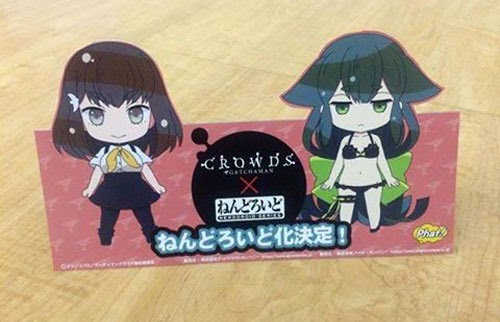