Having held this particular figure in my hand (last week at CSC), I simply COULD NOT get it out of my mind since! THIS specific post (which you are about to read) is my attempt at “exorcising” my toy-lust for the collectible, because (A) I cannot afford it, and (B) It is not something I collect at this time of my toylife (…can’t speak for my “future”, although this could easily be the START if said toy-future…?) :p

The sofubi in question is a sculpt based on the late “Haruo Nakajima” (January 1, 1929 – August 7, 2017) - the Japanese actor best known for being the guy in the Godzilla suit, in twelve consecutive films! 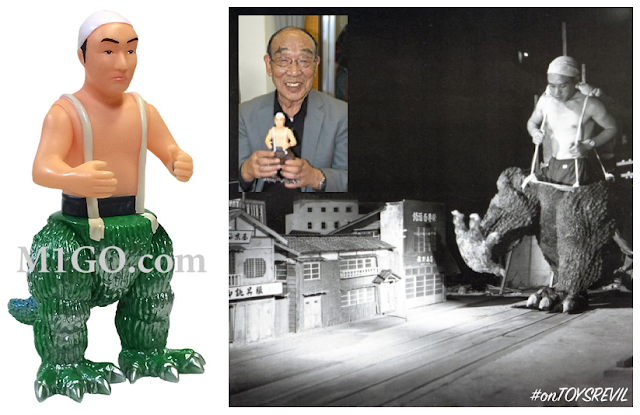 The 9-inch tall figure is produced by M1号 (“M-ICHIGO TOY”), features a sculpt of the actor sans the upper-torso of “Godzilla”, no doubt fashioned after THIS infamous image of the actor “taking a break” from wearing the suit - with the “suspenders/straps” down his shoulders, keeping the bulky bottom of Godzilla up on his body!

There has been a number of limited edition colorways released thus far - featuring two shades of “blue”, a signed/autographed brown edition (down the figure’s back), and in single colors too (Copper, Silver, Gold, Black and a rare “Flesh” version).

Shown below is a montage of the item bagged with header card (snagged from Ebay :p). This particular “green” color way was first released in October, with the second batch reissued circa Tokyo Comic Con 2017! 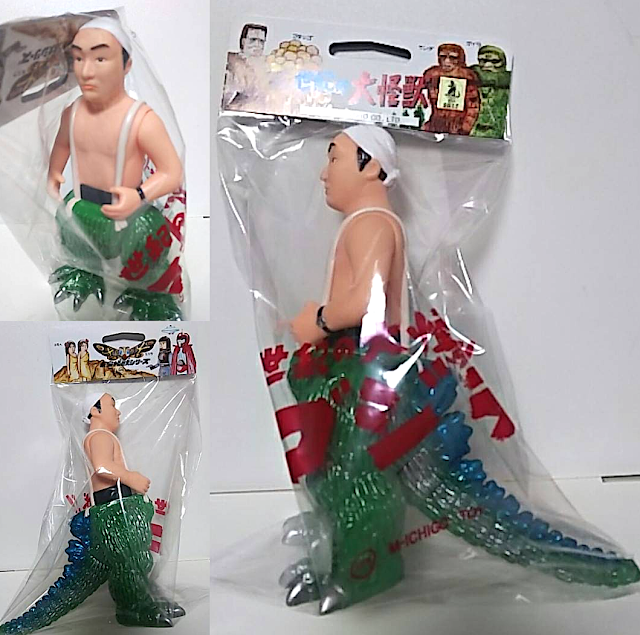 As mentioned in my previous post, the only guy I know carrying this figure in Singapore, will be setting up at China Square Central tomorrow December 10th. This will be his “last time” he will set up shop at CSC, as everyone else from the Sunday flea market has since moved and the brick-n-mortars eventually will vacate the complex before year’s end, so you’d better stay sharp and snag this quick!

Do note that he’ll come after 2pm, and you can find his table on the 2nd floor, in front of Forty42 store! Tell him TOYSREVIL SENT YOU!

Featured #onTOYSREVIL: http://bit.ly/2Bs9rDA = About That #HaruoNakajima #Godzilla #M_ICHIGO_Toy #Sofubi by #M1号 commemorating the late actor who had worn the giant kanji killer’s suit for 12 consecutive films! (Also blogged on #iNotOtaku!: http://bit.ly/2yTiXNL) #gojira (*This snap was taken last Sunday, with this Sunday tomorrow being the last time you might see it for sale at #ChinaSquareCentra, IF it is still available?! Psst: Go after 2pm, outside/opposite Forty42 shop