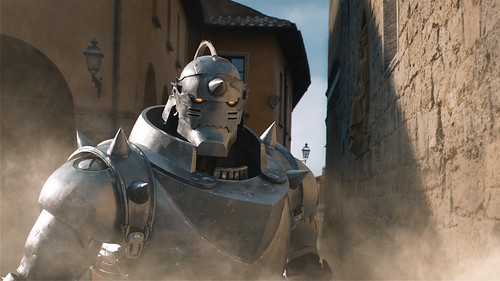 An closer-look at the armoured “Alphonse Elric” has since been revealed on the official website of the FULL METAL ALCHEMIST live-action feature film, to go with his earlier full-body look (and even earlier view of his torso alongside his brother Edward Elric - played by Ryosuke Yamada), having both Elric-brothers ready to kick transmutated-butt on the silver screens!

WHO-IS: ”Alphonse Elric (アルフォンス・エルリック, Arufonsu Erurikku) is the deuteragonist of the Fullmetal Alchemist series. The younger brother of Edward Elric, the Fullmetal Alchemist, Al is also a victim of the failed Human Transmutation experiment in which Ed lost his right arm and left leg. Having had his entire physical being taken away from him in the aftermath of the tragedy, Alphonse exists solely as a soul alchemically bound to a large suit of steel armor. Now, Al travels with his brother in search of a legendary Philosopher's Stone, an item with the power to restore their bodies to normal." (fma.wikia.com)