PLOT: "10 years has passed since the confrontation between Kira and L. Again, Shinigami sends death notes to the ground and due to this, the world soon falls into chaos. Tsukuru (Masahiro Higashide) is a member of the Death Note special task force team with 6 other investigators including Matsuda who experienced the Kira case of 10 years ago.

Mass murders caused by the death note takes place on Wall Street in the U.S., Shibuya in Japan and other places. World famous private investigator Ryuzaki (Sosuke Ikematsu), who is the rightful successor of L, also investigates the mass murders. They discover that 6 death notes exists in the world.

A computer virus called Kira spreads in the world. A message in the Kira virus says to turn in 6 death notes.

A person who has 6 death notes overwhelm the world. The confrontation begins between the person who wants Kira’s revival and the people who want to stop it." (asianwiki.com) 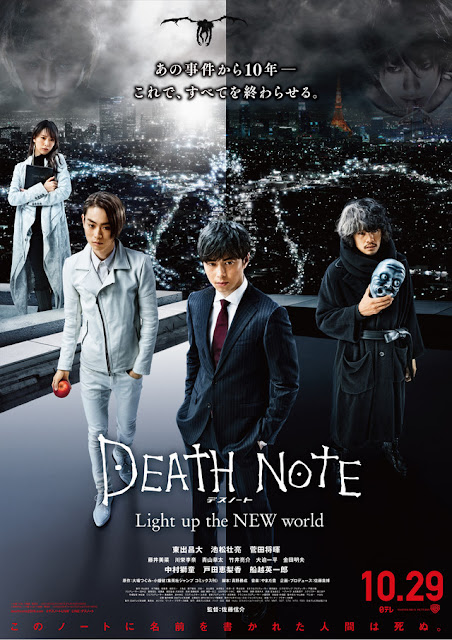 Based on the best-selling supernatural action mystery manga series "Death Note" written by Tsugumi Ohba and illustrated by Takeshi Obata (published from December, 2003 to May, 2006 in Weekly Shonen Jump), the latest live action feature film - titled “Death Note: Light Up The NEW World” is scheduled to premiere on Japanese screens on October 29th 2016 (No date scheduled for Singapore though…).

A sequel / continuation of to the story in "Death Note The Last Name" (2006) movie, this feature is directed by Shinsuke Sato (“The Princess Blade”, “GANTZ”, and upcoming “Bleach” for 2018), will also feature Namie Amuro (pictured with Ryuk in the promotional image to the right) performing the theme song “Dear Diary” and the insert song “Fighter” (rocketnews24.com). Looking nigh interesting thus far too!