A giant robot and a Godzilla-like monster fall in love and a Hummer is born? Love it when genres cross over to the masses, IMHO! Currently seeing a revival / making t's video-rounds on Facebook (how I discovered this clip too!), this was a TVC that aired during the 2006 Super Bowl. 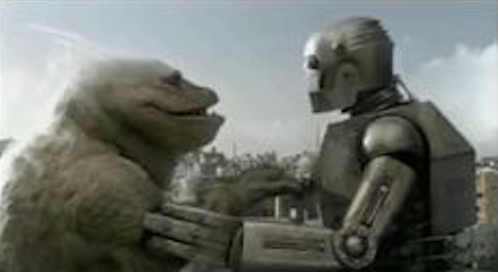 "The spot was created by Modernista! of Boston. "HUMMER is an amazing brand to work with, and we can go places where other brands can only dream of going," says Lance Jensen, Modernista's co-founder and executive creative director. "Monsters" will debut during the MTV Video Music Awards on August 28 (2005) and will air subsequently on other edgy, contextually relevant programming." (adland.tv)