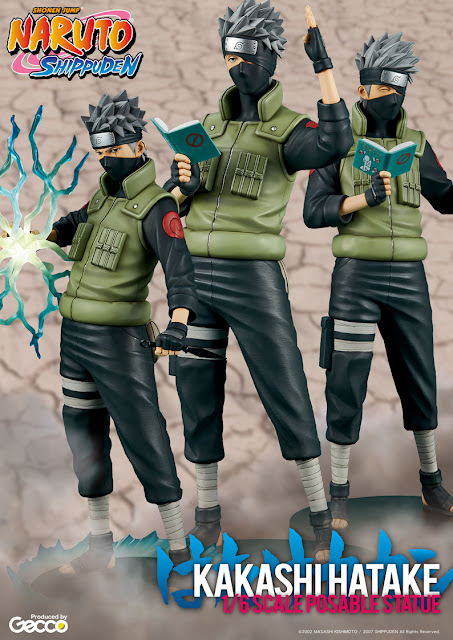 ESCRIPTION: "Kakashi Hatake is expertly recreated as a 1/6 scale posable statue featuring interchangeable arms and heads allowing the collector to display him in a variety of poses.
The battle mode features Lightning Blade, the lightning which spreads and glows beautifully with the LED.
From holding the Kunai knife in his left hand, a bold look on his face with his SHARINGAN open and the explosive lightning effect recreated on the base, this piece is certain to please the most exacting collector!
The everyday Kakashi features a relaxed atmosphere holding the Make-out Tactics novel in his right hand. His heavy-lidded expression almost makes him look innocent, the final facial expression shows him calm with sparkling eyes.
In addition to capturing all the subtle textures and wrinkles this statue also captures the true nature of his character, making it the definitive Kakashi figurine."

Priced at US$199.99, this 1/6 scaled（32cm tall）ABS/PVC preprinted statue is scheduled for a release in October, 2016. The edition featured above is the "Standard" Version, while seen below is the "Fourth Great Ninja War Ver." exclusively sold by VIZ Media in North & South America. The limited edition (of 200 sets) has bonus headbands & waist bag as the special gears for the great war.

Featuring sculpt by Shin Tanabe (JINTO), with paintwork by Katsushige Akeyama, do check in with your fav retailer(s) and distributers for availability. 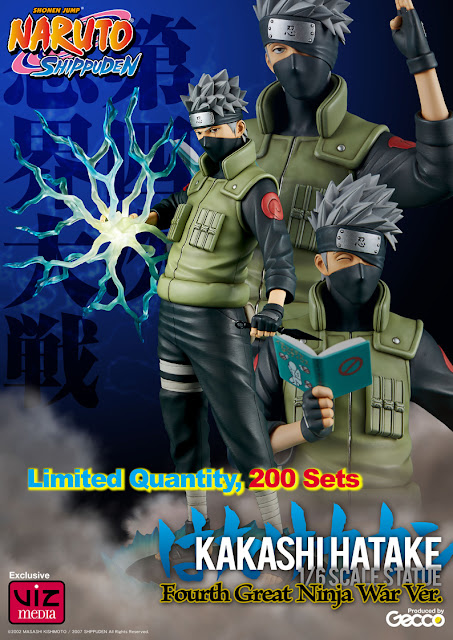 DESCRIPTION: "This special "Fourth Great Ninja War Ver." is limited to only 200 pieces and exclusively sold by VIZ Media in North & South America. The forehead protector has the symbol of Ninja Alliance and is interchangeable with the normal Leaf headband. The well-equipped waist bag is the other special gear making him ready for war."