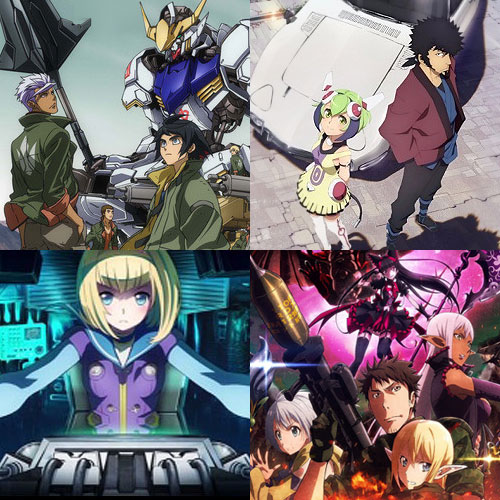 If I count Mobile Suit Gundam ‪‎Iron‬-‪Blooded‬ ‪Orphans‬ and ‪‎Dimension W‬ later tonight, I would have had FOUR anime series end their runs this week alone! Just finished ‪‎GATE2‬, and yesterday ‪HeavyObject‬ ... my otaku-heart sobs silent anguish of emptiness to come … but there's still World Trigger, and maybe I could return to Durarara Season 1 … but frankly my interest for that anime has but dried up pretty quickly, like what happened to Concrete Revolutio, actually haha … can't really force myself to "like" an anime, I reckon, as instinctively you'd have to like and enjoy it first before choosing to continue with it … #firstworldproblems

There's also Terra Formars Revenge on April 2nd to look forward to too! But first, still need to watch and relish Dimension W and IBO first!

JOIN ME in watching the finale for IBO on Daisuki.net? :)

Will be watching the finale / final episode #25 of #MobileSuitGundam #IronBloodedOrphans in approx. 1/2hrs' time (from this gram) on Daisuki.net (a legit site to watch for free, even in Singapore) - Join me? :) ... I've lost close to 20 followers today (so far), who probably do not enjoy my anime screensnaps, alas ... For those who still remain, there's still this ep and the final ep of #DimensionW to come! And after that, 4 of my weekly anime follows would have ended this week ... #sob #inototaku

Thus far I've not exactly been detailed about my impressions for the animes I follow, having decided I'd rather enjoy them and attempt short impressions on my Instagrammed "screensnaps", in lieu of lengthy discussions of each episodes or even video-ed "fan reactions - as is the norm these days, in whichever part of the globe you might be from - proving how much I "suck" at doing this blog-thing hahaha

Nevertheless, I'd still endeavor to share my enjoyment for anime instead :)

#SPOILER and with that, season one of the #HeavyObject #anime has ended with Episode 24! Further impressions of the series to be on #INotOtaku! @ http://inototaku.blogspot.sg :)