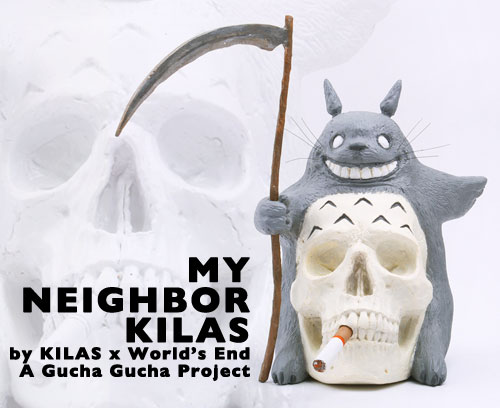 Singapore-based artist KILAS has launched his latest collectible with World's End and their Gucha Gucha project, and it is an irresistible homage to Studio Ghibli's "My Neighbor Totoro" animation classic; with MY NEIGHBOR KILAS!

"KILAS has an unhealthy obsession with mortality, spirits and anything occult. "My Neighbor Kilas", this toy stemmed from the conspiracy theory that Studio Ghibli fans would swiftly deny, which is My Neighbor Totoro as the Angel of Death."

Released Feb 25th and currently available to purchase here on worldsend.co at SG$200 per, in an edition of 20pcs (made to order), with this 8.2” tall (excluding umbrella height) Resin and Fibre Glass figure to be had in two editions: NATURAL and PORCELAIN!

With illustration, design and concept by KILAS, the collectible is hand sculpted and painted by Bagoy of Yeah-Limited (Indonesia). As a fan of Kilas' art and a wannabe-otaku, this is utter EPIC.

ABOUT: "The appeal of Miyazaki’s films is that they can be enjoyed equally by adults and children. While children enjoy the innocence and naivety of the films, adults can interpret their meanings in an ominous sense. My Neighbor Totoro is such a film where the lines of life and death are blurred, giving us the ability to transcend perceptions of what is real and unreal, good and evil.

It is granted that Totoro is a mystical creature that only Mei and Satsuki can see. His presence is linked to the trauma of their sick mother who is on death’s door. Some can go as far to say that Totoro is death itself, alleviating the girls to the fact that they will lose their mother and maybe even themselves in this unforgiving world.

KILAS gives Totoro a skull and scythe in response to this theory, Totoro is now able to embody his true self, the grim reaper.

We have two colour variants; natural and white. It also acts as an incense holder for offerings to the lords of fire and brimstone.
This toy is part of a print series we launched as our homage to anime and manga." 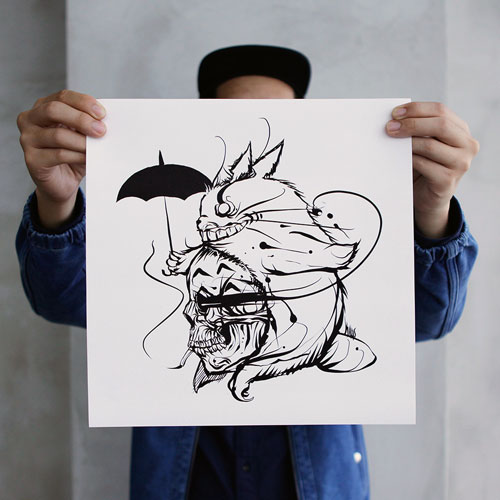 This figure was first borne of the above-featured illustration, also available to purchase here :)