PLOT: "The year is 1968, and the world is swept up in the Vietnam War and student protests. In this time of turmoil, a mysterious young man with white and black hair and a scar on his face is enrolled in medical school. His genius skills with a surgical knife achieve many a medical miracle and are getting noticed. This hero origin story reveals how this young man earned his medical degree and the name of Black Jack." (myanimelist.net) 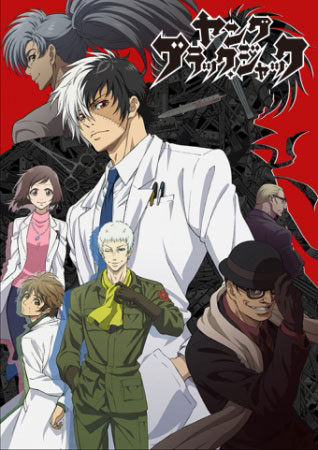 Adapted from a manga of the same name, this 12-episode anime television series adaptation is directed by Mitsuko Kase at Tezuka Productions. The first episode aired October 1st, and we see the 22 year old Hazama attempting his first every surgery procedure.

I had felt that the character animation was pretty strong, and anatomical design was decent. The "angular-jawed handsome boy"-look is balanced with a surprising amount of caricature-ish-cartoon depictions of humans, alongside more "realistic" human designs. Interesting, as it too straddles the notion of the classic manga by Osamu Tezuka, and even paid homage to at the end credit sequence, where the manga designs are placed alongside their "anime" re-design! Great job here!

#watched #YoungBlackJack #anime Ep1 - decent ep and a series I item to follow ... I like Italy the en credit sequence showcase both the classic manga character design, beside the new anime versions, not forgetting their roots - Nice! #nototaku

A whole lot of pathos and poetry have been burdened on the lead character, providing a continued swelling of "drama" to his eventual state of being viewed on a pedestal - and that can be somewhat off-putting, but for that particular scene after his successful operation, that made me se the balance the storyteller/filmmakers are trying to make, and warrant a continued viewing of the series, IMHO.

Opening theme is "I am Just Feeling Alive" by UMI☆KUUN, while the Ending Theme is "All Categorize (オールカテゴライズ)" by Takuto (焚吐). The anime has been licensed by Sentai Filmworks.

ORIGIN: "Young Black Jack (ヤング ブラック・ジャック Yangu Burakku Jakku?) is a Japanese manga based on the manga Black Jack written by Osamu Tezuka, and is written by Yoshiaki Tabata and illustrated by Yūgo Ōkuma. It is serialized at Akita Shoten's Young Champion magazine in its November 2011 issue. An anime adaptation has been announced to air at Japan in October 2015.[1] The story follows Black Jack as a medical student in the 1960s.[2]" ()

Episode One (In Japanese language / No English Subs):