PLOT SUMMARY: "The school comedy story is set in a junior high school and centers on the original manga's characters such as Eren and Mikasa as they battle with Titans. The spin-off incorporates gags while using Shingeki no Kyojin's story and notable scenes as its basis." (www.gogoanime.com) 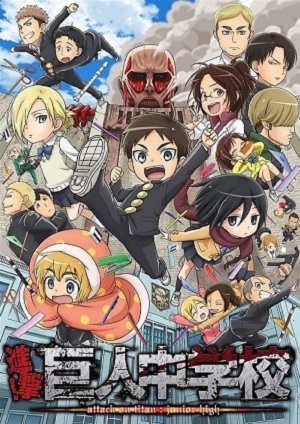 By all accounts I should be horrified at this notion of self-cannibalism of concept and regurgitating out an abortion of an idea, likened to self-bootlegging and pissing on it to make it smell better … but after all this inner venom and vile, I still clicked PLAY on the first episode of "Shingeki! Kyojin Chuugakkou", and found it suitably, well, still as repulsive but not smelly as I'd imagine it to smell…

First up, the names are the same, the scenarios have been re-written, although there are circumstances fans of the OG anime will recognize (I have not read the manga, so cannot comment on that aspect), since been twisted to suit this scenario of the characters in "Attack On Junior High School", whose headmaster is … SPOILER AHEAD … The Colossal Titan. So you get where I am going so far? Good.

It's the first day of school in Ep.1, and the guys had wandered into the TITANS part of the school. A quick escape later, they are introducing themselves in their classroom, and we see and recognize the players. A whole lot of tomfoolery ensues throughout the episode, and from the opening/closing segments, you'll be seeing a heckload more ridiculousness to come.

And with all that is being twisted and warped, the "intensity" of the characters remain somewhat intact, especially in "Eren", which is the comedy in and of itself, I guess?

#SPOILER guess who's the school headmaster in #shingekikyojinchuugakkou #anime ? #inototaku

#watching Ep1 of #shingekikyojinchuugakkou #anime - make no mistake, this Totally capitalises on the #AttackOnTitan #shingekinokyojin concept with turning everything chibi hahaha #inototaku

My favouritest part of the entire anime so far? The Opening Sequence, which parallels the OG anime's, but with kid characters!

"Kid" versions does not mean "chibi-fied" versions tho… Just saying'!

I was nearly up-in-arms about this farce, but then I am reminded of my own leeway-laxed acceptance of the live-action feature film adaptation, so I really should not chuck stones at Titans, and not expect them to turn and notice and try to eat me, soooo…

The trick is not to take it all too serious, otherwise you'd be flipping tables left, and right, and up another restaurant's nearby too.

I might not be going back for seconds myself, but you are most welcomed to relive your fav AoT moments, now "remixed" for a possible new generation of money spenders on new merchandise LOL

This 12-episode series has a rating of "PG-13" (for Teens 13 or older) and is essentially 17 minutes of "Comedy" and "Parody", as produced by Production I.G and FUNimation Entertainment.