WHAT-IS: "Mobile Suit Gundam: Iron-Blooded Orphans (Japanese: 機動戦士ガンダム 鉄血のオルフェンズ Hepburn: Kidō Senshi Gandamu Tekketsu no Orufenzu?), also referred to as G-Tekketsu (Gの鉄血?), is a 2015 Japanese mecha drama Anime series and the fourteenth incarnation to Sunrise's long-running Gundam mecha metaseries. It is directed by Tatsuyuki Nagai and written by Mari Okada, a team which previously collaborated on Toradora! and Anohana: The Flower We Saw That Day. Iron-Blooded Orphans is slated to air in Japan on MBS and other JNN stations on October 4, 2015, making this the first Gundam series to return to a Sunday late afternoon time slot since Mobile Suit Gundam AGE.

The series's catchphrase is "The sustenance of life, is on the battlefield." (いのちの糧は、戦場にある。 Inochi no kate wa, senjō ni aru.?)" (Wiki) 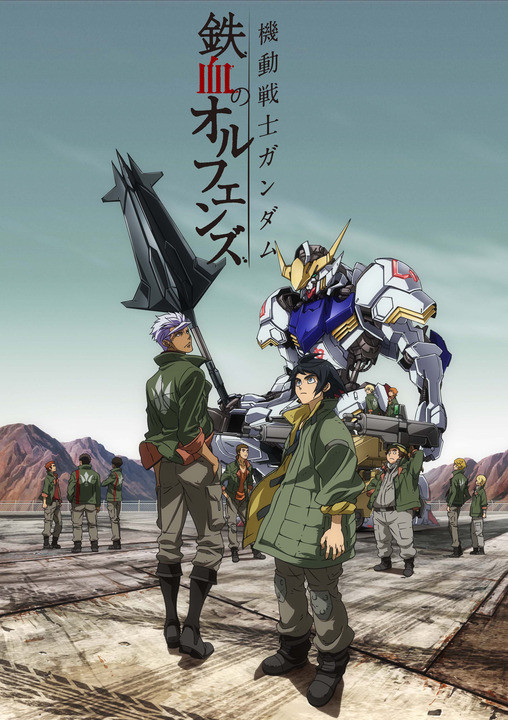 "Could never really get deeply into the Gundam stories, there's so many and so much history to catch up on, but the Mecha designs have always been fantastic."

Diving head-long into this anime (full version with English subs can be viewed posted below), it does not take long to realize I've waded into deep waters, of an ocean of history before this, and I have zero idea what is going on, beyond the fancy mechas and intensely awesome and vibrantly colored background and scenes (Major Kudos for that!), which frankly deters me from continuing the series .. but that's just me, you folks enjoy the ride, no worries :)

Meanwhile, here are more screensnaps off my laptop taken was I viewed it online and instagrammed them on @toysrevil. As well I have uploaded them HERE on FB :)

#watching #MobileSuitGundam #IronBloodedOrphans #anime Ep1 #inototaku - great looking backgrounds! Much efforts out in these as well :)


EP ONE PLOT: "Mikazuki belongs to the private security company CGS, at the Martian city of Chryse, which has been hired to escort a girl named Kudelia to Earth. But just as preparations for departure are underway, Gjallarhorn attacks CGS in an attempt on Kudelia's life." (Description)

STORY: "The year is Post Disaster 323. More than 300 years after a great war between Earth and Mars known as the "Calamity War", Mars has been successfully terraformed and colonized by humans. However even with the technological advancements, the humans in Mars crave freedom against the government of Earth. A young orphan named Mikazuki Augus is part of a group of children who work for the civilian security company Chryse Guard Security, entrusted with the safety of the Martian Princess Kudelia Aina Bernstein, who has plans for her nation of Chryse to secure independence from Earth.

One day, the group was attacked by the Earth Military organization Gjallarhorn, which aims to stop the Martian independence movement. During the attack, the leader of the children within CGS, Orga Itsuka, decides to rebel against the adults who had escaped and left the children to remain and fight as decoys. Augus must now choose to either follow his friend, or his mission as he stumbles into the legendary mobile suit: the Gundam Barbatos." (Wiki)