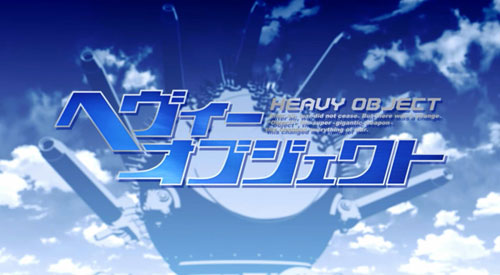 Since introducing HEAVY OBJECT earlier in the week, I could not wait to devour the first episode on Sunday, and with heightened expectations, I sat thru the entire first episode and came out revved up and inspired for MORE!

Posted here are just some of my personal impressions, along with a liberal dose of instagrammed snaps taken off my laptop screen as I viewed them, with more uploaded HERE on FB :)

The first episodes sets off educating the viewers with the history that led to the existence and reliance of the "Object", and if you like "big guns", "massive explosions" and "mass destruction", this might make a for a relishing sequence, which took up a decent chunk of the opening (5 minutes?) - very much necessary to set this "alternate universe" reality, IMHO - and I have zero issues with that.

Aside, the notion of "war" is on one hand thinly veiled and reference, but if looked at another perspective, is a "what-if" evolution to "war". In the instance of the world of HEAVY OBJECT, "war" actually equals "less human death", with the gargantuan mecha bearing the brunt of the brutality. How that carries forth within it's status quo, for the duration of this series, is something I am looking forward to see change.

This is the world of the "Heavy Object" anime, and any illusions of comparisons to OUR real world, should be abandoned, like most other animus, I suspect. But hey whatever floats your battleships, this is a path I choose to take, anyways :)

Whatever "preachiness" the series might afford, I am instead taken by the "DESIGN" of this anime - in mecha, tech and character designs. I always appreciate good design, especially with setting the scene and tech ... Seeing this reminded me of the joy of watching the design in "Last Exile: FAM The Silver Wing".

So far, the mixture of low tech maintenance and high tech operational platforms, are charming, and I am not disappointed. Beyond the large 50m wide round ball of destruction (This Gen1 Object is named "Baby Magnum"), the trailers for subsequent eps show differing designs of "Objects" from different areas, so that is always a plus, methinks, and something worth looking out for.

#watching new #anime #HeavyObject Episode 1 - I am extremely interested in the design of this anime, in both mecha, tech and characters ... This Gen1 Object is named "Baby Magnum" :)

#watching new #anime #HeavyObject Episode 1 - I always appreciate good design, especially setting the scene and tech ... Seeing this reminded me of the joy of seeing the design in #LastExile #FAMTheSilverWing :)

Essentially, my viewing habits might be "biased", as I am opened to less than lackluster scripting while gawking at "good design", but don't worry, I have a threshold, and so far - from the dialogue to the storyline, I am enjoying the frankness of the characters and where they stand, for now.

But of course, it is not just "death" and "destruction" here, as we are reminded to swallow the chill-pill more often then not, for when the cheekiness of anime prevails - with two references to boobs, in two separate unrelated sequences, no less, and they remain hilarious, in a ever-slightly perky way LOL

Maaaaan, I am liking Heavy Objects so far, and will be adding this to my weekly Sunday Anime Trip viewings!

#watching new #anime #HeavyObject Episode 1 ... But f course we are reminded that this is an anime after all hahahaha

#watching new #anime #HeavyObject Episode 1 - Don worry, it is not just death and destruction here hahahaha ... LOVED the first ep and will be following this anime til the end!

Episode One in Full (with Eng Subs):