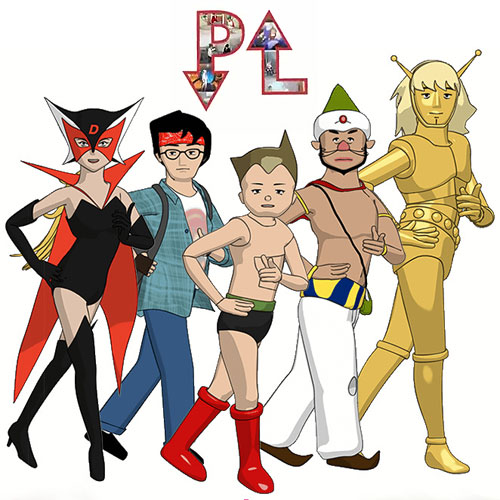 Chanced upon a "new" anime series on Sunday, and watched the first episode out of sheer curiosity, because of both the series poster, premise, and what turned out to be BRADIO's opening scene song; "HOTEL Alien (HOTELエイリアン)" (I loved them for Death Parade!).

Essentially this is a somewhat "skit"-fueled series featuring fictional characters from the worlds Tezuka Production and Tatsunoko Production, engaging in what appears to be regular everyday / everyman conversations!

#watching #PeepingLifeTV #anime Ep1 ... I think I get it now - it's like separate skits in a single Ep, featuring characters from the worlds of Tezuka Productions and Tatsunolo Productions having everyday conversations with each other ... Reminds me of Chinese Shiang4 Shen1 haha

The first episode I sat thru offered 4 x separate scenes, the first one being Astro Boy and his professor having a conversation about the latest trend in getting girls, while another had Yatterman's Doronjo asking Ga to fix her bicycle, even after she was defeated by him in an earlier battle...

The third sequence had Black Jack visiting the doctors because he thinks he caught the flu - so you get the gist of the format by now? The 4th sequence is between two seemingly regular folks, yakking on on an airplane…

Without a doubt, this seems to be about "conversations" - like Chinese "crosstalk" / "相声" (ie: "a traditional Chinese comedic performance in the form of a dialogue between two performers" - Shiang4 Sheng1), which no doubt the Japanese language gets lost in translation into English Subs … any friends who speak Japanese out there can confirm this?

Peeping Life - The Perfect Edition: "This "slow-life anime" is part of the datsuryoku-kei (ennui-style) genre of comedy that depicts the listless minutiae of everyday life. The series combines motion-captured improvised acting with computer animation into a series of comedy shorts." (www.animenewsnetwork.com)

They featured essentially 5 minute skits/shorts of 10 episodes each season, and are directed by Ryoichi Mori (who I think appears in the anime too, as the guy wearing the red headband?), with animation production by FOREST Hunting One and Comix Wave Films.

I reckon this current series is preceded by "Peeping Life - We Are the Hero" DVD, described as such (and no doubt providers a better description on what the tv series might be about, IMHO);

DVD DESCRIPTION: "The Peeping Life series is known for letting the audience peep into random, trivial, yet hysterical episodes in the everyday lives of different characters. In the Peeping Life - Tezuka & Tatsunoko Wonderland series, we enjoyed observing hilarious episodes in the everyday affairs of celebrated characters from legendary anime production studios, Tezuka Productions and Tatsunoko Productions.

In Peeping Life - We Are the Hero, the heroes of Tezuka and Tatsunoko are back and comically mindless as ever! Shota is over at Kota’s house studying for their midterm exams, when the TV displays a news flash about a monster attack. An explosion is heard near Kota’s house. Shota, Kota, and the people of Japan sit tight, believing that, “At times like these, a hero will unfailingly come to save the day!” But our heroes appear to be simply continuing with their everyday lives as usual…" 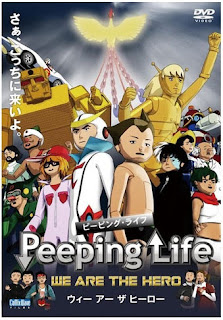 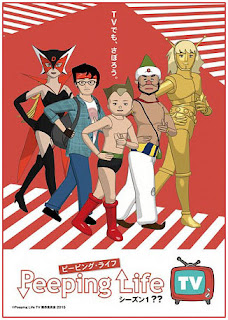 Shown up top is the opening sequence of the anime, featuring "HOTEL Alien (HOTELエイリアン)" by BRADIO, while at the bottom of this post is the ED theme "Shinyaku Satori no Sho (新約さとりのしょ)" by detune (Actual PV here on #TunesTalk).

My personal patience is tested here, but for my curiosity, and for the absolute "different" form of entertainment beyond my regular anime watches … but I somehow feel I am getting "short changed" here as I have zero command of the Japanese language and am missing out here, besides the flaccid but humble CG / computer generated animation, ya know? But maybe this lies the charm, IMHO?

For folks in the United States, you could catch it on www.crunchyroll.com, and you can find out more about the series on www.ntv.co.jp/pltv (in Japanese). Enjoy :)