Psycho-Pass Movie … nearly, but not yet...

It was all good with English dialog until 3+ minutes in when the Japanese language kicked in for #PsychoPass Movie (!!!) ... I guess I'll have taken wait for Eng Sub version ... Oh man I so cannot wait!!! Loved the 2 series! Missed PsychoPass #anime!

PSYCHO-PASS MOVIE PLOT: "Four years after the death of Shogo Makishima and the disappearance of Shinya Kōgami, the Japanese government begins to export the "Sibyl System" technology to other countries, spreading it throughout the world. A state in the midst of a civil war, SEAUn (the South East Asia Union, pronounced "shian"), brings in the Sibyl System as an experiment, and the coastal town of Shambala Float achieves temporary peace and safety. But then terrorists from SEAUn appear in Japan, slipping through the Sibyl System and attacking from within, drawing Akane Tsunemori and her team to Shambala Float to investigate." [ BLOGGED ]

This officially makes it TWICE that I'd gotten over-excited for this anime movie, but HAVE NOT WATCHED it yet! Oh man, either I suck it up and have the patience to wait for the (fan)sub, or tide myself over with re-watching the anime series, BOTH of them! … although I need to buy the DVDs first … AND find a another machine to watch the DVDs as my laptop player is currently kaput LOL 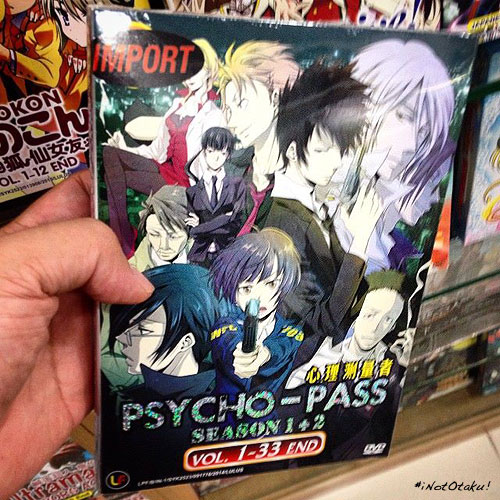