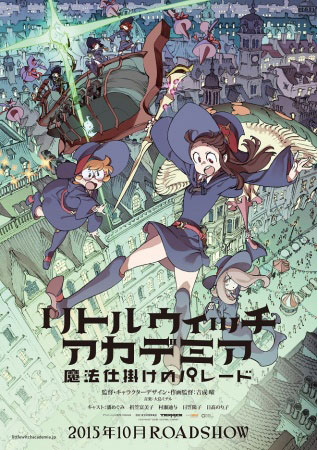 Directed by Yoshinari Yoh, a preview of "The Enchanted Parade" made it's debut at the 2015 Anime Matsuri (April 3-5), with the full film to premiere somewhen in October 2015. Seen above is the current promo teaser video for the film's roadshow.

I've seen the first film online a while back and had adored it to bits! An I have attempted in vain to find a proper English subtitled and full screen video to share, until NOW! Witness this Harry Potter meets tweenie Witches in-training with the wonders of anime fueling the fun and excitement, and see what the glorious fuss is all about ~ ENJOY! :)

WHAT-IS: "Akko Kagari enrolls into Luna Nova Magical Academy (ルーナノヴァ魔法学校 Rūna Nova Mahō Gakkō?), a school for young witches, after being inspired at a young age by a witch named Shiny Chariot, and often spends her days hanging with her classmates, Lotte and Sucy. However, she has trouble paying attention in class, doesn't know how to ride her broom, and is often looked down upon for admiring Chariot, whom many believe gives the wrong impression about witches. One day, as a teacher instructs the class to explore a dungeon and retrieve rare treasures, Akko finds the Shiny Rod that belonged to Chariot. Meanwhile, the top student, Diana Cavendish, inadvertently breaks a seal on a dragon that grows more powerful by absorbing magic. Noticing the Shiny Rod still has power after all these years, the teacher sends Akko and her friends to reach the Sorcerer's Stone, the source of the academy's power, before the dragon can devour it and become invincible. Arriving at the stone, the Shiny Rod absorbs some of its power, allowing Akko to fight against the dragon. Put into a desperate situation, Akko hears Chariot's words coming from somewhere, that a believing heart is magic, and with renewed conviction she uses the full power of the Shiny Rod to destroy the dragon." (Wiki) 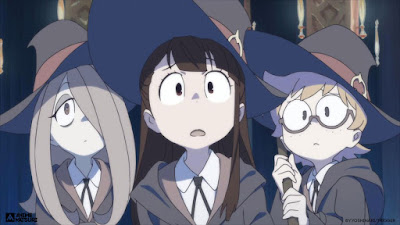 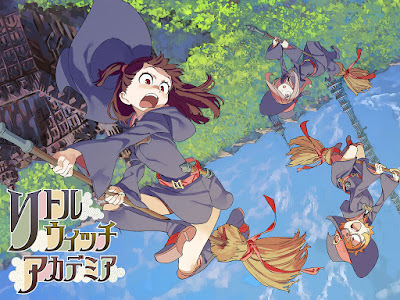