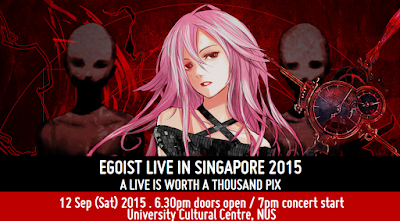 EGOIST LIVE IN SINGAPORE 2015
A Live is Worth a Thousand PIX
• Egoist’s first SOLO Live in Singapore.
• A new concert experience employing cutting edge full motion capture technology.
• Tickets on sale 26th June 2015
Singapore, 25 June 2015 – Coming on September 12th at the University Culture Centre at the National University of Singapore, EGOIST will be holding its first solo live in Singapore. The musical unit consisting of Ryo of supercell and Chelly (who was chosen from over 2000 applicants in vocalist auditions), will be performing in a full fledge one night only concert.