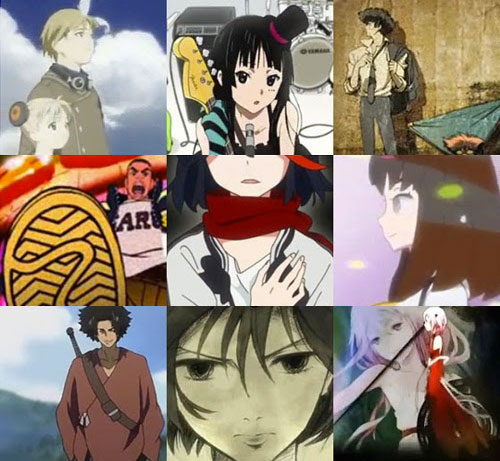 This list might have been made in the beginning of 2015, but it does not mean the anime the songs represent are around this era, as they are drawn from my personal viewing choices (and I have been catching up on loads of "older" shows lately :p), and how the song resonates with me individually. Of course your opinions and choices might be different from mine, so feel free to leave a comment here :)

As well quite a few ED tracks have been listed in a previous Top Ten List (including "Welcome to the Xth Dimension" from Space Dandy, "Uso" from Fullmetal Alchemist: Brotherhood, and "Starboard" from Last Exile - Fam: The Silver Wing), which I have since decided not to add to this list, because there are just too many awesome tracks to be heard! Hence "Jan 2015 Edition", as I may be adding more Top Tens as I consume more anime series LOL …. meanwhile, this is MY TOP TEN FAV ANIME ENDING TRACKS (Jan 2015 Edition):


MY TOP TEN FAV ANIME ENDING TRACKS #10: ""Don't say "lazy"" is a single used as the ending theme for the first season of K-ON! - Always memorable - both the song and visuals, even if I did not complete the series nor remember much of it LOL

Here's a "live" concert performance by Shoko Nakagawa with SCANDAL (my fav J-Pop Girl band)- now THAT's the sort of K-ON! I could get into! WHOO-HOO!

MY TOP TEN FAV ANIME ENDING TRACKS #9: "Innocent Note" by Maaya Uchida is the ending theme for the first season of GATCHAMAN CROWDS. Maaya Uchidawas also the voice actor for "Hajime Ichinose" in the anime! Here is the full track (audio only):

MY TOP TEN FAV ANIME ENDING TRACKS #8: "Departures (Anata ni Okuru Ai no Uta)" is the first ending theme to GUILTY CROWN, performed by a "Egoist" - a fiction band from the series, and is written by Supercell (who also wrote the OP "My Dearest").

"A 17-year-old artist named Chelly provided the vocals. Chelly was picked by Ryo of Supercell after an audition of 2,000 candidates. Chelly also sang the insert songs in Guilty Crown." (Wiki)

MY TOP TEN FAV ANIME ENDING TRACKS #7: "The Real Folk Blues" is the ending theme for COWBOY BEBOP, performed by The Seatbelts, featuring Mai Yamane (with lyrics by Yuho Iwasato). The track also appears on the series-related album "Cowboy Bebop Vitaminless" (カウボーイビバップ ビタミンレス Kaubōi Bibappu Bitaminresu?). Could not find the actual anime end/credit-sequence, instead featured above is the audio only :p


MY TOP TEN FAV ANIME ENDING TRACKS #6: "TT2 Owari no Uta" by Scha Dara Parr is the ending theme for "TOKYO TRIBE 2". I discovered the anime at a much later date, and this track always comforted me at the end of each episodes' adventures and hijinks.


MY TOP TEN FAV ANIME ENDING TRACKS #5: "San Francisco" by Midicronica used as the final ending of SAMURAI CHAMPLOO - whose songs and beats resonated with me long after the anime has faded in my memories :p


MY TOP TEN FAV ANIME ENDING TRACKS #4: "Great Escape" by Cinema Staff was used as the closing theme for ATTACK ON TITAN (For episodes 14-25). Fav anime at the moment, so this was a shoo-in :)

Check out the OG MV:


MY TOP TEN FAV ANIME ENDING TRACKS #2: "Over The Sky" by Hitomi Kuroishi (from her album "Angel Feather Voice") was used as the ending theme for LAST EXILE. Melodically pleasing to my senses, and as well brings a tear to my heart, of an unexplainable "loss" of a forgotten tragic event as yet unfolded … as haunting is the album version featured below:


Hitomi's "Starboard" (for "Last Exile: Fam The Silver Wing") is on my first "Top Ten Anime Songs". I am actually afraid to get her albums, as much as I want, because I fear I would relish and dwell in the beautiful tragedy of her songs :p


MY TOP TEN FAV ANIME ENDING TRACKS #1: "Utsukushiki Zankoku na Sekai" (美しき残酷な世界? / "This Beautiful Cruel World") by Yōko Hikasa was used as the closing theme for ATTACK ON TITAN (first 13eps) and is yet another haunting end-song for animes I seem to fall for LOL

This was replaced by "Great Escape" in Episode 14 on … meanwhile, this is the Original MV: