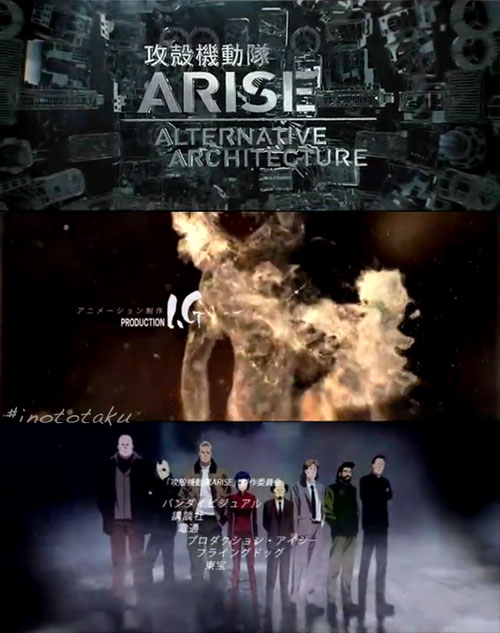 And while I've read in advance that "Arise - Alternative Architecture" would be presenting the Ghost In The Shell ARISE films re-edited for television, I managed to catch the first two eps in the series - which were cut from the 4th film, while upcoming 3rd ep teases a "lookback" at Motoko's career, which would easily be from the first film. I had wanted to keep the spoilers, but nevertheless here are both Eps 1 & 2 on youtubed-video, along with English subtitles :p

And while the narration for the films were bloated with tons of talkies (hallmark of most GITS eps, I'm afraid hahaha), I had expected the shorter run time (at 24 minutes per episode) would somewhat dampen the enthusiasm, but alas, "hallmarks" will be hallmarks :p

The story telling this time around is compartmentalized - but I could hardly be subjective, as I had already seen the movies, and hence somewhat knew what the short-hand meant in the tv version, but in some instances it seemed it needed the viewer to able to make their own assumptions, in particular instances relating more with the subplots with regards to the team, rather than direct with the core characters, like Motoko, Batou et al.

One of the aspects of the ARISE films which I personally enjoyed, was the play and time the rest of the Section 9 team had been exposed to, with the concept of "team" a nice heightened aspect to the regularly acknowledged focus on Motoko, Batou, Tougosa, and even the Chief (who has black hair here heehee which I reckon Motoku's actions thru the years led to the old man's hair turning white/grey ;p).

We'll see how the rest of the series holds up. I'm not ready to give up on this series yet! Check out more images and write-up (In Japanese) via the show's official website at kokaku-a.jp/tv/.