My Top Ten Fav Anime (Series) Theme Song #4: "Guren no Yumiya" ("Crimson Bow and Arrow", styled in German as "Feuerroter Pfeil und Bogen") by Linked Horizon was used as the opening theme for ATTACK ON TITAN, for the first 13 episodes, in the first season.

I remember eagerly waiting to watch each new episode every Sunday morning (here in Singapore), after brushing my teeth and breakfast, the weekly ritual remained the same right up to the end of the current season, and whenever I hear this tune - regardless if the show had finished or not - it inevitably reminds me of the excitement and anticipation for my current fav anime!


Toy-Wise, I have been steadily collecting gachas and Nendoroids, remembering just a scant two years ago, it was a struggle finding anything more than Colossal Titan! The situation these days is encouraging, with the principals seeing shelf-action, including Eren, Mikasa, Levi and even Armin. But there exists a series I am gagging to get my hands on; Pop! Vinyls from Funko!


It boggles my mind why I would have missed out on blogging about, much less knowing the existence of, "Attack On Titan" Pop!s from Funko! But I am less ashamed of missing out on the news and more "angry" not know about the series, until I saw the image on a fellow-IGer's stream … And here I was (near) diligently doling out Funko's press releases too! Looks like that has to change soon … ;p 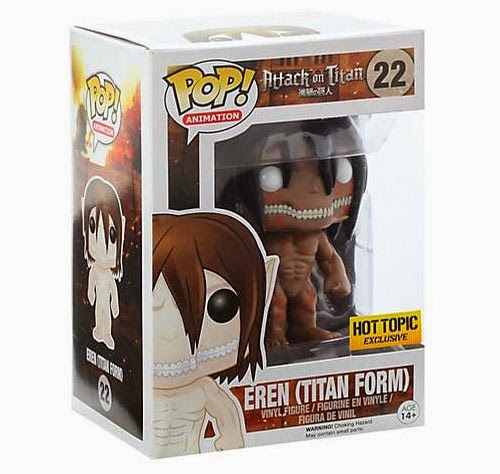