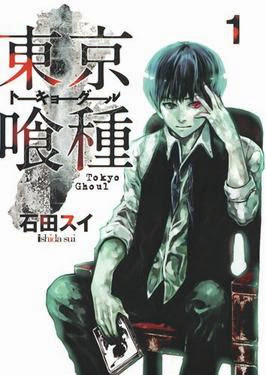 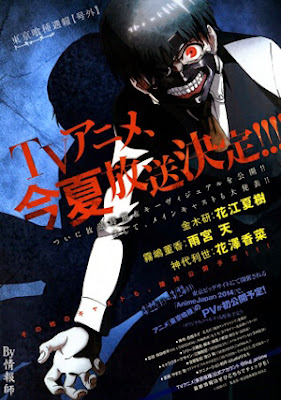 "Tokyo Ghoul (Japanese: 東京喰種-トーキョーグール- Hepburn: Tōkyō Gūru?) is a manga series by Sui Ishida. It was serialized in Shueisha's seinen manga magazine Weekly Young Jump between September 2011 and September 2014 and has been collected in fourteen tankōbon volumes as of August 2014. A sequel titled Tokyo Ghoul:re began serialization in the same magazine in October 2014 and a prequel titled Tokyo Ghoul: JACK is running online on Jump Live. A 12-episode anime television series adaptation by studio Pierrot aired on Tokyo MX between July and September 2014 and a 12 episode second season titled Tokyo Ghoul √A, started airing on January 8, 2015. Funimation has licensed the anime series for streaming and home video distribution in North America." (Wiki)

Essentially function "ghouls" co-exist in our mortal world, likened to stories of Vampire clans in modern day television series, along with an entire culture and hierarchy existing. The devouring of human flesh rides the zombie-wave sweeping the fictional world right now too. Yes, references to "cannibalism" is rife here.

Series protagonist "Kaneki Ken" is half-human and half-ghoul (how he got there is spoilerish but explained in the first two eps of the series, somewhat revealed in the fan-made video embedded above :p), and he becomes the series "hero", but after a near whole season of whining and tortured tears, amidst the gore and bloodshed (The Blu-Ray has 5 eps "uncensored"). And this is a series not into sexualized "fan service" too, which I appreciate in a pseudo-"adult" anime.

I was clued in to this anime by Benjamin on my FB, and as well I recognized the S&M-facemask seen and on display at anime-events in Singapore, but had not put two-and-two together until I binge-watched the first season earlier this week, and adored it OMG

ANIME PLOT SUMMARY: "(Tokyo Kushu, Toukyou Ghoul, Toukyou Kushu). Aired: Jul 4, 2014. The suspense horror/dark fantasy story is set in Tokyo, which is haunted by mysterious "ghouls" who are devouring humans. People are gripped by the fear of these ghouls whose identities are masked in mystery. An ordinary college student named Kaneki encounters Rize, a girl who is an avid reader like him, at the café he frequents. Little does he realize that his fate will change overnight." 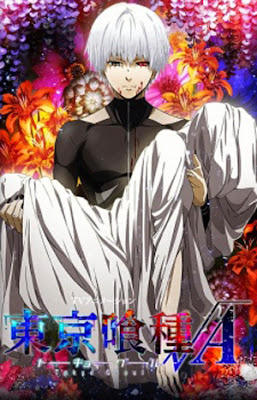 I had not read the manga, and frankly do not need nor intend to, and will focus on the current "Tokyo Ghoul √A" anime. My thoughts inevitably drift to a "live" action adaptation of this property, (1992 live action "The Wicked City" directed by Peter Mak and produced by Tsui Hark, which was not a good memory to be had LOL) to which I quickly dismiss, as I fear whatever special effects might not do the anime versions justice.

This adaptation in turn came after the 1987 Japanese OVA horror neo-noir film directed by Yoshiaki Kawajiri, based on Hideyuki Kikuchi's novel of the same name.

Be that as it may, sometimes stories should jut remain in their anime (or even manga) form, IMHO … least they get Hollywoodized and have Scarlet Johansson playing the role of "Major Motoko" (name since changed) from "Ghost In The Shell"! *GASP*

In homage to the fab time I had watching the name,
I did a few quick sketches of Kaneki Ken:

In homage to a fabulous time I had watching anime #TokyoGhoul and #TokyoGhoulvA, this is my quick #hengdraw of Kaneki Ken :)