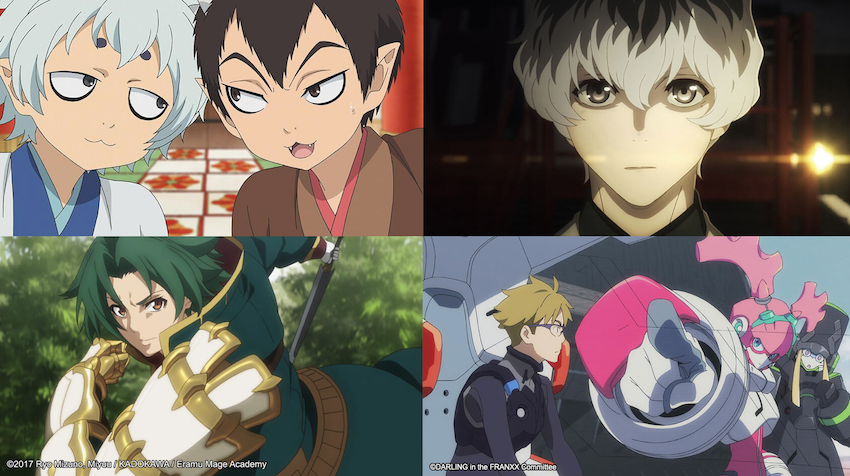 Announcing the simulcast titles for ANIPLUS Asia this Spring - featuring simulcasts of "Tokyo Ghoul:re", "Hozuki’s Coolheadedness Season 2", "PERSONA5 the Animation", "Steins;Gate 0", on top of Record of Grancrest War & DARLING in the FRANXX from last season. *All titles are Within 1-hour of Japan airing.

Scroll down to find out what to look out for, and enjoy your anime viewing on www.aniplus-asia.com!

WHAT-IS: Tokyo Ghoul:re is adapted from a popular Japanese manga, which circles around the Quinx Squad, a new squad in the CCG made up of humans who had undergone the surgery to become half-ghouls to use their powers.

STORY: Set two years after the raid of Anteiku by CCG, Tokyo Ghoul:re follows Haise Sasaki as they work to exterminate ghouls. However, there’s more than meets the eye, and Haise Sasaki has unknown memories that are clawing out to him and bringing him to the past.

WHAT-IS: Hozuki’s Coolheadedness Season 2 is back with showing life in Hell in the form of a dark comedy.

STORY: The series is adapted from the highly popular manga that follows the daily happenings of Hell where they are understaffed, and Demon Ogre Hozuki, the remarkable chief deputy to the King of Hell, tends to all matters in place of the King of Hell.

WHAT-IS/STORY: Being adapted from the popular Japanese role-playing game, PERSONA5 the Animation follows the protagonist into another world, where everything is for them to steal. Follow the Phantom Theives of Heart as they reform the hearts of corrupt adults by stealing the source of their distorted desires.

WHAT-IS: Based on the popular sci-fi visual novel of 5pb. and Nitroplus, Steins;Gate 0 is a sequel to one of the most popular anime series, Steins;Gate.

STORY: Following the events of Steins;Gate, Steins;Gate 0 follows Okabe who fell into depression after being unable to save Makise Kurisu. Everything is slowly going back to normal, until he encounters an acquaintance of Kurisu. He is pulled back into the past, and more tragedies unfold.


ANIME TITLE: "DARLING in the FRANXX"