Posted by TOYSREVIL on December 09, 2016
ANIPLUS announces that Season 2 of “Attack on Titan” will be simulcasting on www.aniplus-asia.com in April 2017! And while we await trailers for the anime, here’s a peek at the official “key visual” for the highly anticipated sequel to the 2014-anime! 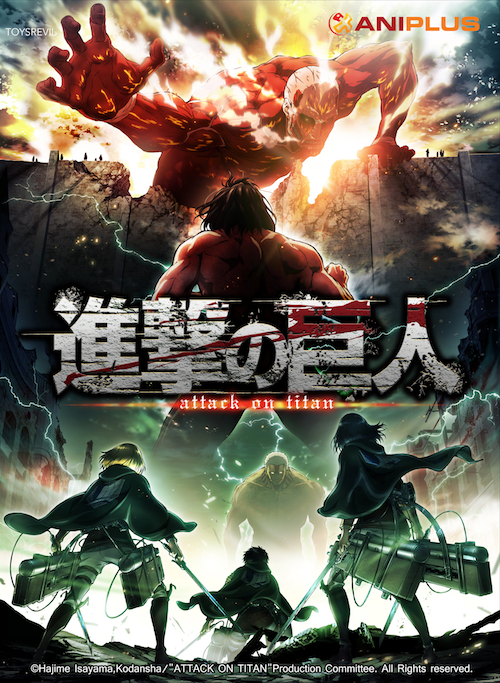 I still remembered the intense waiting for the weekly episodes - which I had dutifully watched every Sunday morning, funnily on a murky playback, as I had not been able to track down a much better site … but I was always focused on the story which unfolded before me - free from comparison - either by reading the manga by Hajime Isayama, nor any other media besides the anime episodes itself!

I had been watching anime on and off through the years, but always in a binge capacity, and never truly following a weekly, and if I am being wholly honest, AoT was the main reason that had pulled me back into the fold, and of my subsequent and current need for anime and leading to THIS blog!

It wasn’t just the gore, not just the twisted charm of despair and faint hope, and a dystopian fictional future that parallels our real world, but also somehow the notion of “loss” and humanity, that resonated with me … along with happenings in my personal life, “fear of emptiness” was indeed powerful, and alluring, I admit.

Truthfully, my Sundays felt empty when the final episode aired, and with every crumb of AoT slices I managed to find online, or via collecting the related toys and collectibles, failed to regain my interest … and with the 2 “live action” feature films somewhat utterly tainted my acceptance of the notion, I had frankly not held on any further than I originally had…

Maybe the soundtrack (featured below) might help pull me back into the fold … it is after all, one of the vast difference when it comes to visual art comparisons - manga illustrations or moving animation - is the added depth of emotion that comes with the sensory perception, and to me is one of the main failures of the live action films … but that’s just me :)


*ATTACK ON TITAN on iNot Otaku!*