PLOT: "When they were little, Edward Elric (Ryosuke Yamada) and younger brother Alphonse's mother passed away. The brothers attempt to revive their mother and perform a human transmutation which is taboo in alchemy. Their attempt fails. As a result, Edward loses part of his body and Alphonse loses his whole body. Edward sacrifices another part of his body to affix Alphonse's soul to a body of armor. Edward goes on to become an Alchemist. He sets out on a journey to find the “Philosopher's stone,” which has the power to get back what they lost." (asianwiki.com)

Yes, you read that right - FULL METAL ALCHEMIST has been adapted in “live action”, with the feature film scheduled for a 2017 premiere in Japan by Warner Bros.!

Directed by Fumihiko Sori, based on Fullmetal Alchemist by Hiromu Arakawa, you can view the above teaser in higher-res on the official film site @ wwws.warnerbros.co.jp/hagarenmovie.

I wonder if there’ll be any “uproar” about the film’s main characters being Japanese-male with blond hair, in lieu of the story’s Caucasian-blonde-haired-male (*thinks Scarlet Johanssen as “The Major” in GHOST IN THE SHELL … different fan base, I guess?). On adapting the source material, Director Fumihiko Sori has this to say;

"I want to create a style that follows the original manga as much as possible. The cast is entirely Japanese, but the cultural background is Europe. However, it's a style that doesn't represent a specific race or country." Regarding the faithfulness of the adaptation, which has characters of non-Japanese ethnicity, the director said, "There will never be a scene in which a character says something that would identify him/her as Japanese." (animenewsnetwork.com)

The casting list (via) shows the characters to be featured in the film, which apparently combines ALL stories into a single film. Having been a fan of the “Fullmetal Alchemist: Brotherhood” anime, I cannot wait for this incarnation, regardless of accuracy to the source material - I have always the DVD to go back to hahaha 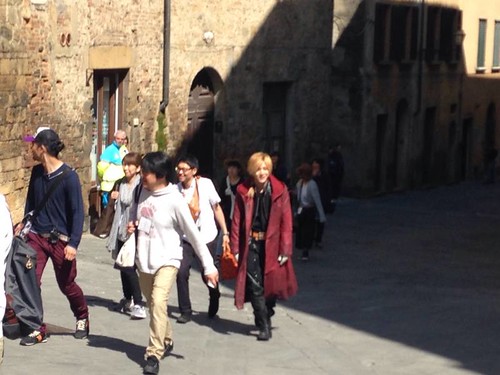 Above is a BTS-pic of the filming in the Italian town of Volterra in June, featuring Ryōsuke Yamada (Hey! Say! JUMP member and live-action Assassination Classroom's “Nagisa”) as “Edward Elric”.