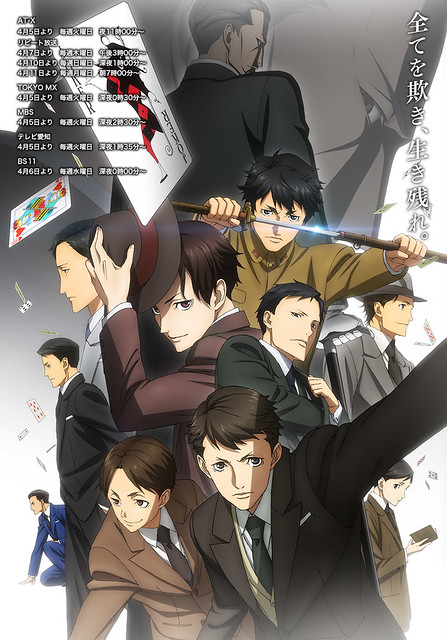 The first episode premiered April 5th, 2016, and will run for 12 episodes in the first season.

Featured here are my screensnaps and impressions of the first episode, and you can check out the official www @ jokergame.jp (In Japanese language).

#watching new #anime with Episode One of #JokerGame #spy #inototaku

#watched #JokerGame #anime Ep1 - featuring animation by Production I.G. possesses a subtle class in execution with more than capable visual depictions that veer toward anime-realism rather than anime-fantasy with exaggerated communication. This is to be taken a a "serious" depiction of "life". #inototaku

#JokerGame is an #anime adaptation of a novel series (as opposed to a manga, which was adapted later in 2016) and was fir seen as alive action feature film which I reviewed on #popcornx last year :) #inototaku

"Monsters" of D-Agency, to the eyes of Sakuma, the straight laced military trained soldier in the agency, whose POV we see in the first Ep (Part 1) of #JokerGame #anime ... #inototaku The pace is slow and seemingly methodical, with no huge action splash depicted in the first ep, and I somehow appreciate that ... On one end the lack of melodrama might out-bore someone used to the hyper-realism of "regular" anime offerings ... On the other, the melodrama seems to be boiling underneath the surface of the characters, and it would be interesting to find out hat their motivations and actions are/will be...

Most of the principals in D-Agency and the #anime is introduced in Ep1 of #JokerGame - where a seemingly innocent round of poker reveals more about the story behind the "Joker Game" concept of this story ... #inototaku ... "Spy" in espionage terms, set in the late 1930s ... Autumn of 1937, to be exact. An there is a whole lot o smoking scenes, set against jazzy club tracks making them cool beans an activity to be had hahahaha

The story of #JokerGame #anime is set in the autum of 1937 near the beginning of the Japanese occupation of Manchuria. Whether folks might look upon this anime as propaganda or such political intentions, I am personally not interested, and choose to enjoy the anime for what it is, IMHO. #inototaku

"The story is set in the autumn of 1937 near the beginning of the Japanese occupation of Manchuria. Most of the first episode occurs within 'Greater East Asia Cultural Society' which is actually a front for the Japanese spy agency where it trains spies for insertion into other countries. This episode introduces all of the characters and introduces the viewer to the concept of 'The Joker Game'. The episode ends with the training spies searching a supposed foreign spy's home for evidence proving that he is in fact a spy. Sakuma's life is used as a pawn by one of the other spies when the act of him committing seppuku is used as a bargaining tool to get inside of the foreign man's home. It however becomes clear that actually Sakuma is being played by his superior and the other spies and there is no evidence linking the foreign man to being a spy." ("Joker Game (Part 1)")