PLOT: "Due to depleting natural resources and overpopulation, humans look to Mars as their next habitat. Terraforming is the project to change Mars' environment to accommodate humans. For this project, cockroaches are sent to Mars and mutated to walk. In the year 2599, 15 poor Japanese are sent to Mars to take out the cockroaches. They are unaware of what they are up against." (AsiaWiki)

When I first read about & reported on Miike Takashi directing the "live" action feature film adaptation of anime Terra Formars, I could not wait to see his brand of visual violence making this brutal adult anime into film … and now (thanks to Facebook), we have a trailer to gawk at, posters to peep, and an official website to go to @ wwws.warnerbros.co.jp (All in Japanese text).

The multi-national assortment of characters from the anime has since been replaced by a all-Japanese cast and characters here, and while I'll reserved judgment from what I see here (I'd like to thank the live action Attack On Titan to have curbed my enthusiasm for anime-to-live adaptations), I have "faith" in Miike Takashi (his "Yakuza Apocalypse" was No.4 in TOYSREVIL's #TopTenFilms2015), so yep, FINGERS CROSSED! 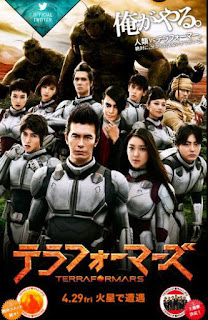 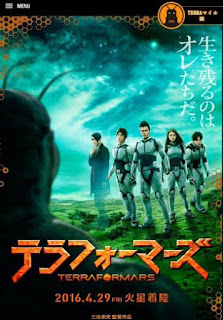 "Terra Formars" is scheduled for a release in Japan on April 29th, 2016. No further information on other parts of the world (at least not listed on IMDb).

Interestingly, the sequel to the anime titled "Terra Formars Revenge" will apparently also premiere in April 2016 (Wikipedia). Scroll down instead to have a read of the plot from the source material itself; the TERRA FORMARS MANGA.

MANGA PLOT: "In an attempt to colonize Mars, 21st century scientists tasked with terraforming the planet seed it with a modified algae to absorb sunlight and purify the atmosphere, and cockroaches whose corpses spread the algae across the planet as they feed.

Five hundred years later, the first manned ship to Mars lands and its six crew members are attacked by giant mutated humanoid cockroaches with incredible physical strength, later labeled "Terraformars"; the crew is wiped out after sending a warning back to Earth. Decades later, a multinational expedition is sent to exterminate the mutated bugs and take control of the red planet only to be vanquished as well, except for two survivors who manage to return to Earth, one swearing to return and avenge their fallen companions. As a third expedition is assembled, questions are raised about the true origin of the Terraformars and their connection with a deadly virus afflicting mankind.

To fight the Terraformars' strength and agility, members of the second and third expedition undergo genetic modification to inherit the characteristics of other organisms, only possible after having a special organ implanted with a 36% chance of surviving the surgery itself." (Wikipedia) 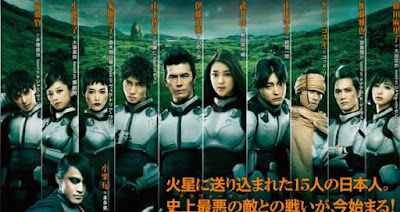