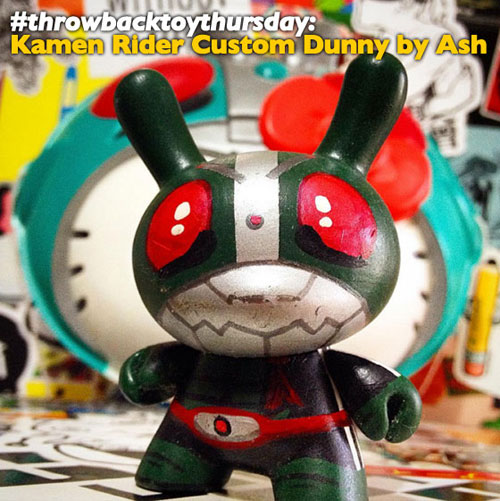 #throwbacktoythursday: "Kamen Rider" Custom Dunny by Ash Shiota is on focus today, with this 3"er purchased direct from the artist, back in 2012, after blogging about it and then bugging him for one on Facebook! LOL

Ash doesn't seem to be doing much (if any) custom toys these days, but you could check out his toy collection snaps on his Instagram @ash_shiota, and as well you could CLICK HERE to view his custom covered #onTOYSREVIL :)

I used to be fascinated with the character in childhood (more for his motorbike, actually hahahaha), but had never owned a toy figure, until this custom! I also remembered owning this guy gave me the impetus to actually pick up the S.H.Figuarts version, at a local anime convention not longer ago later - primarily for the purposes of taking a two-shot of them - (Yes, those were the 'good old days' when "buying toys" wasn't a constant life-changing deliberation …) - which I only managed to do so this morning! #OMG

Although there's a slight wear-n-tear and smudges (on my part), I still treasure this dude, and as well has a swell place in my otaku-collections :)

Scroll down for more snaps and IG videos, including a look at the silly-ness of what the Kamen Rider "behind" the Dunny was actually "doing"...!

usagizero said on my IG: "They should do a Kamen Rider series of dunnies, I would buy them all in a second. Though, i do need to save more money. ;)"

Bro, I know the feels, but thank goodness they've not, otherwise I'd truly be brokeass! LOL

What the #shfiguarts #KamenRider was doing behind the Dunny custom while I was taking pics of said Dunny ... The silly-ness of toys in #TOYSREVIL HQ continues! #toylife #playtime #filteredimages