And while last week's viewing of World Trigger was of World Trigger:Toubousha-hen, this week's listing continued with "Episode 51" … or at least via the online portal I view my anime from weekly… Will find out "later" and enjoy the anime first!

Nevertheless, we see and perhaps understand a bit more of "Xeno" and "Lilith" from the Errant Nation "Ergates", and as well a glimpse at their pursuer(s) "Gieve" and "Charon", as Osamu and Chika embrace their new "friends", while Yuma takes a decidedly quitter step back for things to unfold. Xeno's "identity" is further revealed (thanks to Lilith, of course), and here's hoping this way forward would be enriching for the viewers, IMHO … perhaps I was more "tired" and exhausted than usual, because I find myself no interest in finding more about the new characters ~ heh.

#watching #WorldTrigger #anime Ep51 ... Yep, getting confused about the numbering and "new series" ... Will find out later and enjoy the anime first!

From the snow capped mountains, our intrepid characters next gets assigned to naval adventures! I like the way this situation is for Heavy Object, and from the opening sequences, we can expect the terrain to be different in each story arc, and that'll be an interesting change, at least "geographically".

And while Heavy Object was pretty "heavy" watching last episode, THIS particular ep seemed a lil'bit too "quippy" for my tastes, and hardly dripping with pathos and melodrama like previous eps … and while the cheekiness took a back seat last ep, they make a comeback, with a mild vengeance too!

#watching #HeavyObject #anime Ep4 - #cheekysequence 3/3 ... Either this, or "lost in translation" hahahaha

Yes, i'd love to have that Object keychain charm, thanks! #watched #HeavyObject #anime ... A bi too quippy this EP for my tastes anyways, hardly dripping with pathos and melodrama like previous eps haha

And "Yes", i'd love to have that Object keychain charm, thanks!

I found myself searching for new animes to watch - with no new eps listed for One Punch Man (EDIT: Watched the next day on Monday, actually), and of having no desire to watch Young Black Jack this week (:p) - I'd chanced upon "Peeping Life TV", for which I've blogged in detail about here. The series features fictional characters from the worlds Tezuka Production and Tatsunoko Production, engaging in regular "everyman" conversations in Japanese!

"The first episode I sat thru offered 4 x separate scenes, the first one being Astro Boy and his professor having a conversation about the latest trend in getting girls, while another had Yatterman's Doronjo asking Gan to fix her bicycle, even after she was defeated by him in an earlier battle...

The third sequence had Black Jack visiting the doctors because he thinks he caught the flu - so you get the gist of the format by now? The 4th sequence is between two seemingly regular folks, yakking on on an airplane…" 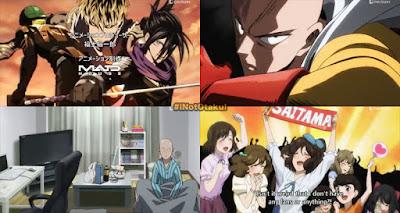 In Episode 4 of One Punch Man (which I watched on a Monday instead of Sunday), we are introduced to two more characters: The Bicyclist for Justice "Mumen Rider" and the paid assassin / bodyguard / modern ninja "Speed'O'Sound Sonic", plus other new "villains" and "Hammerhead" … and as well Saitama decides to go register for Hero Association, and drags Genos along.

So far, this is considered a "quieter" episode for me (If you'd argue this is "infantile humor", I will not argue haha) - more introspective and less mayhem and destruction, and that surprisingly works fine too :) 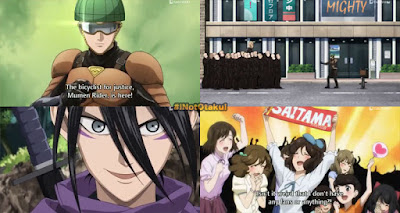 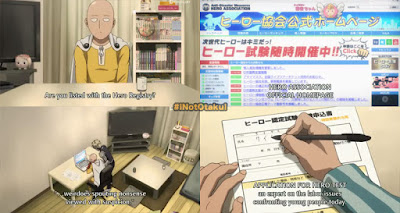