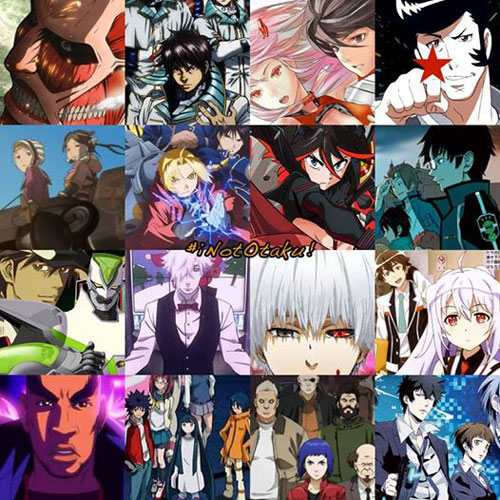 My earliest memories of watching "anime", were of Captain Future, Blocker Gundan 4 Machine Blaster - by virtue of them only being "Japanese animation" - but for all intents and purposes, had been dubbed in Malay and broadcasted on television TV3 during my primary school era (*cough-late-70s-cough*). Not forgetting Ultraman and Kamen Rider live-action shows, paralleling the western styled cartoons on local channels like He-Man, MASK etc.

Growing up, "Anime" was a fun distraction for me, outside of western comicbooks from brands like MARVEL, DC, Dark Horse etc and even 2000 A.D., and as well western cartoons had my devotion for a period of time when ads for cartoon toys were found in comicbook pages - hence the interest then, I suppose. Thinking back, as much as I lauded them, I did not actually own that many of them, turning my childhood toy collecting focus on Playmobil and model cars instead...

And while I did dabble in manga-translated comicbooks from Viz (I think I still have somewhere in my hoard the first 4 issues of "Mai The Pyschic Girl", "Area88', "Kamui", "Appleseed" etc LOL), that was the closest I'd been to the manga-scene (besides the odd TO-Y issues :p).

I have had always watched anime movies/features rather than "series", as I had not wanted to devote too much time and effort following them ... It was only until the last few years that I had managed to re-pick up watching long-form anime, starting with #FullmetalAlchemistBrotherhood and #LastExile #FamTheSilverWing on #animax and subsequently devouring #TigerandBunny online, then the floodgates opened LOL

It was not until decades later, when I had embraced and reformed new opinions of anime, thanks to the medium of long form feature films, most notably via local Film Festival screenings, actually. Classics like AKIRA, JIN-ROH, GHOST IN THE SHELL echoes firmly through my mindscape, and eventually genre bending projects like PAPRIKA, GIR WHO LEPT THROUGH TIME left me emotionally shaken and converted to the allure and power of ANIME!

From wholesome goodness like Naussica Valley of the Wind, and My Neighbour Totoro from Studio Ghibli, to the chibi cute, from techno-mecha like Appleseed and Patlabor, to the gore-porn genre of Devilman - I slowly devoured and cherished them casually through the years. Strangely, Gundam, Macross et al did not interest me as much - which I blame the Transformers for first capturing my attention LOL

I had never truly embraced the notion of long-form anime, on television and/or online - fearing of being sucked into a long-drawn out effort to dedicate my attention to the series and seasons, which meant concepts like Dragonball, Naruto, Bleach et al eluded my viewing-radar, purposely so.

#AttackOnTitan #ShingekinoKyojin #psychpass #psychopass2 #TerraFormars all had a group setup I enjoy and group dynamics I like :) #anime

My memory might be fuzzy now, but I reckon my viewing habits changed somewhen after I survived Stroke back in 2010. I suddenly I had the "time" - being suck at home for recovering and rehabilitation - I had then begun switching on the television again, this time to the local animation channel "Animax", out of sheer boredom and curiosity … well, I had nowhere else to go, did I? :p

And while many a titles had since come and gone from memory, I remember making an extra effort to follow Fullmetal Alchemist: Brotherhood, and subsequently Last Exile: FAM The Silver Wing (I never did complete other series on TV except afterwards online actually :p) … and ever since purchasing Wild Tiger and Barnaby Brooks Jr S.H.Figuarts action figures at a local anime festival, did I track down the anime online, and devoured it, opening the floodgates to my addiction now!

I looked for older titles. I experimented with new titles.
Some worked for me, some did not. I am still constantly searching for anime to watch and enjoy.

#KilllaKill was such a thrill while #DeathParade #TokyoGhoul #TokyoGhoulvA are #animes I look forward to new seasons of!

I am practically a "noob" when it comes to anime (I do no even know if the term "noob" is "old fashioned to use now too lol), and I do not claim to be otherwise. My scope is probably as narrow even tho I might self-style this blog or even myself as a wannabe-"otaku", but all that does not diminish my love for anime(s), and neither should the quantity of their viewing habits quantify anyone's devotion to anime, IMHO.

My depth of knowledge might not be vast, but I aim to share and geekout with anyone and everyone else similar to me on the www, here on my genre-dedicated blog here on #iNotOtaku! :)

I chose my poison, and devour them with aplomb the ones I adore, and discard the ones I had started but could not continue to follow. My loyalty is to my personal tastes LOL ... and in time, my toy-collecting habits also changes course, with my attention on anime-related action figures and products, but that is another series of toy-addiction posts to come on this blog MUAHAHAHAHAHAHA

#GuiltyCrown left me with very little memory of, besides the theme songs ... #TokyoTribe2 is ever the classic, while #AirGear remains one of my fav #anime :)

I thoroughly enjoyed the 1st season of #SpaceDandy but somehow couldn't start the 2nd season at all ... I stuck with #GatchamanCrowds to the end of the 1st season but remain disappointed til the credits roll ended ... And lost my interest for #JoJosBizzareAdventures #StardustCrusaders after the Singapore episodes LOL ... Not all #anime is winning for me :p