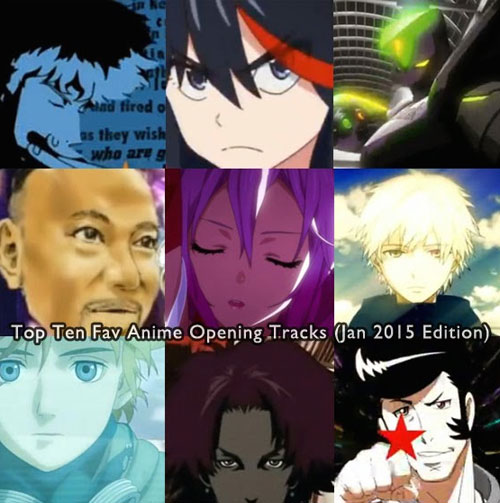 
TOP TEN FAV ANIME OPENING TRACKS #10: "Unravel" by TK from Ling Tosite Sigure, from the first season of TOKYO GHOUL (Thanks to Benjamin Lai - on my FB - for the recommendation to this anime!) - for which I have only just binge-watched both Season One, and the newly launched Series 2 AKA "√A" (pronounced "root A") which the below opening track "Munō" (無能; Incompetence) by österreich is from. Glorious.


TOP TEN FAV ANIME OPENING TRACKS #9: "Top of Tokyo" by Illmatic Buddha MCs is the Opening Theme for the series TOKYO TRIBE 2 - which I enjoyed as they make direct mention of the characters in the anime too LOL


TOP TEN FAV ANIME OPENING TRACKS #8: "Cloud Age Symphony" by Shuntaro Okino from LAST EXILE. I was pretty surprised with this tune, as you'd hear soundscapes like these more in anime feature films rather than television series … maybe that's why it helped the allure? Check out full audio below:


TOP TEN FAV ANIME OPENING TRACKS #7: "Viva Namida (ビバナミダ)" by Yasuyuki Okamura for SPACE☆DANDY! I truthfully did not enjoy this track THAT much, until I found the full version on youtube (embedded below) which provided a heap dose of infectious funk! Reminds me of SMAP in some instances tho … (Yes, I used to listen to SMAP, so sue me LOL)


TOP TEN FAV ANIME OPENING TRACKS #6: "My Dearest" by Koeda, Supercell for the anime GUILTY CROWN. I managed to binge watch the entire series some time back, and as much as I enjoyed it, the opening track was more memorable LOL … check out the original music video from Koeda:


TOP TEN FAV ANIME OPENING TRACKS #5: I only begun to appreciate "Sirius" by Aoi Eir as the opening track to KILL la KILL after I binge-watched it, and totally adored the anime OMG (*the start of a new addiction). Loved the hyper song and beat befitting the edited action sequences. A head-bopper, for sure! (Instrumental Version). Check out the original MV by Aoi Eir:

Another track heard in the series is "Sanbika", also sung by Aoi Eir:

Listed here predominately because TIGER & BUNNY was one of my second-fav anime series (after ATTACK ON TITAN) and the OP reminds much of the anticipation of each episode, and the rollicking-fun-time I might (and sometimes "not") be experiencing …
Tied with the second OP theme:


TOP TEN FAV ANIME OPENING TRACKS #3: "Battlecry" by Nujabes and Shing02 heard as the opening theme for SAMURAI CHAMPLOO, for the ultimate opening sequence evah! Check out the full audio track below:


TOP TEN FAV ANIME OPENING TRACKS #2: "Anime"-wise, this track was used as the 10th opening theme for BLEACH, for which I had zero interests in, except for this track from SCANDAL; "「少女S」/ Syoujo S" = because I heart SCANDAL, that's why :)

(FYI: Their track "Shunkan Sentimental" to FULLMETAL ALCHEMIST: BROTHERHOOD is on my October 2014 Edition, because, SCANDAL :p)


TOP TEN FAV ANIME OPENING TRACKS #1: "Tank!" by The Seatbelts from COWBOY BEBOP. How could I forgo this track, even if "technically" it's not a "song" per se. "The song is a big band jazz piece in a Latin infused hard bop style with a rhythm portion that combines a double bass and bongo drums." (Wiki). Me? I just call it "awesome" :)