And while we might have seen the footage before, for the "live" action feature film adaptation of the anime/manga - shown here today is the exact trailer now in full clarity and with English subtitles too! To be released in Singapore via Encore Films, in Golden Village cinemas - with "Part 1" (of 2 parts) premiering August 13th, 2015 … which frankly is too long a wait OMG! … and what's this about a New Digital TV Series to coincide with the launch of the film? Don't think there's much avoiding the film later part of the year LOL

Meanwhile, here is the official synopsis of the film:

SYNOPSIS: "100 years ago, titans suddenly appeared on Earth. Soon, human civilization veered on collapse due to the titans. Humans then built a giant wall to defend themselves. Within the giant walls, humans lived in peace, but, 100 years later, the giant wall is broken.

Mankind is under the terror of titans, a beast in which feast on human flesh. Eren Yeager, a young boy determined to make change when he himself could transform into one. He is humanity's last hope." (via) 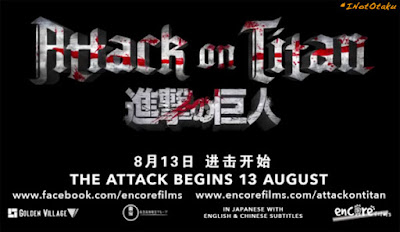 WHAT-IS: "Attack on Titan began as a manga in 2009 and has since given rise to light novels, anime, and video games based in a sci-fi world where humanity lives in cities surrounded by enormous walls and does battle with gigantic humanoid creatures (which are known as Titans). The Attack on Titan property is being adapted into a live-action feature by the source manga’s creator, Hajime Isayama, along with scribe Tomohiro Machiyama, for the movie’s director, Yūsuke Watanabe (Dragon Ball Z: Battle of Gods)."