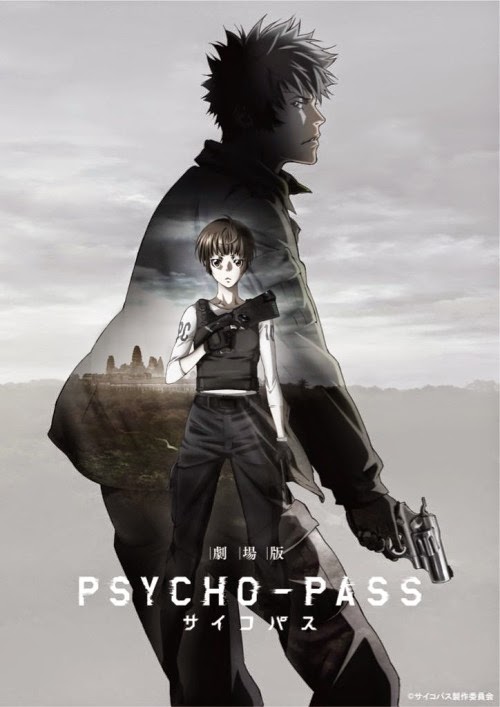 PLOT: "Four years after the death of Shogo Makishima and the disappearance of Shinya Kōgami, the Japanese government begins to export the "Sibyl System" technology to other countries, spreading it throughout the world. A state in the midst of a civil war, SEAUn (the South East Asia Union, pronounced "shian"), brings in the Sibyl System as an experiment, and the coastal town of Shambala Float achieves temporary peace and safety. But then terrorists from SEAUn appear in Japan, slipping through the Sibyl System and attacking from within, drawing Akane Tsunemori and her team to Shambala Float to investigate." (Wiki)

Understand that I binge-watched PSYCHO-PASS Series 1 (Uncensored) and Series 2 online via free streaming websites, which essentially presented a murky visual quality (but made me focus on the "story" instead, so it works out on that respect) … and seeing the trailers for the animated movie, left me in awe and astounded for the visual splendor! AND the story/plot seems so delicious and a swell continuity to the series, IMHO.

Other than that, watching both trailer (first trailer above in Japanese language, while the 2nd trailer below has English subtitles) only serves to entice me further to watch the film, hopefully this time I could catch it in the cinema (did I miss the screening in Singapore???), or a better quality DVD (hopefully I can afford it when it drops :p) ~ heh.

Production by Production I.G and distributed by Toho (Japan) and Funimation (North America), the PSYCHO-PASS movie was released January 9, 2015 (Japan).

"Psycho-Pass: The Movie (Gekijō-ban Psycho-Pass) is a 2015 Japanese anime science fiction crime film by Production I.G and ran in over 100 theatres. It premiered in Japan on January 9, 2015. The plot involves the appearances of terrorists in Japan. It is directed by Naoyoshi Shiotani whereas the chief director is Katsuyuki Motohiro. Gen Urobuchi and Makoto Fukami contributed together as the film's writers. The film has been licensed by Funimation Entertainment." (Wiki)