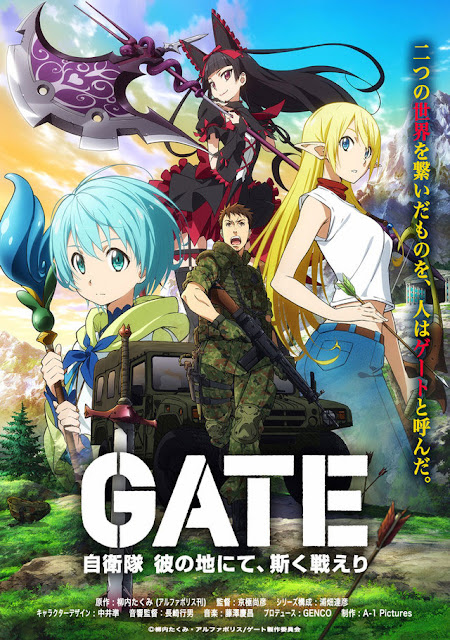 I have not been a huge fan of fantasy-styled anime, choosing to focus currently on superhero / mecha-heroes / giant mecha / supernatural-themed series, so when I saw the image poster for "Gate: Jieitai Kanochi nite, Kaku Tatakaeri", I had no interest to click on to view.

Fast forward a mention from a student of mine (Thanks, Dave!), I decided to give it a whaler, and ended up enjoying it more than I had imagined I would!

And while the full description is featured below, my take is simple: A mysterious portal (that looks like an entrance to a underground train station in a business district) appears on a busy street of Japan, whereby fantasical creatures appear and causing death and destruction to the civilians. Armored soldiers with spears, bows and arrows, alongside battle trolls and flying dragons, are confronted by the firepower of the Army, and the war is won. Not long after, the Japanese army decides to cross over into the otherworld via "The Gate", to find out what's going on.


Introducing #RoryMercury in S1E3 #GATE #Anime ... Am starting to like this series :)

"Character Cliches" are given a slight twist here and there, adding a semblance of "depth" to them, including the lead male protagonist; "Itami" - who is an otaku that things before he does, a trait not seen as often in anime or even other media shows LOL … and at the very least he contains his cool (somewhat :p) and recognizes when meeting fire-breathing dragons, elves and Gothic Lolita-isque oracles LOL

Ep.1 establishes the story, while Ep.2 & Ep.3 sees the team cross over and interact with the folks in the fantasy-realm, as well being introduced to characters, and as well we get to see the "politics" of the kingdom … 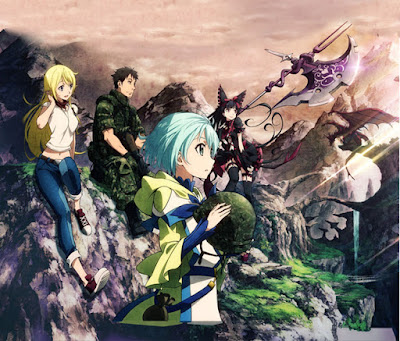 The animation aesthetics is not overwhelming, which works for me as emphasis might be on "story-telling" instead (sorta like "World Trigger"-ish?). The anime is produced by A-1 Pictures ("Black Butler", "The Idolmaster", "Sword Art Online"), and directed by Takahiko Kyōgoku. The series premiered in Japan on July 3, 2015, and is currently streamed online by Crunchyroll and is licensed by Sentai Filmworks in North America.

I am putting "GATE" on my weekly #SundayAnimeTrip watch-list now, and look forward to be seeing what happens next!

WHAT-IS: "Gate: Jieitai Kanochi nite, Kaku Tatakaeri (ゲート 自衛隊 彼の地にて、斯く戦えり?, lit. Gate: The Self-Defense Forces Fight Like This in That Place) is a Japanese fantasy novel series written by Takumi Yanai from 2006 and later published by AlphaPolis. A manga adaptation illustrated by Satoru Sao began in July 2011, and three spin-off manga began in 2015. An anime television series being airing from July 3, 2015 and has been licensed by Sentai Filmworks in North America."

PLOT: "When a portal from another world appears in Ginza, Tokyo, a legion of soldiers and monsters emerge to attack the city. Thanks to their far more advanced weaponry and tactics, the JSDF easily repels the enemy, passes through the gate and establish a forward base of operations to force the Roman-styled empire of the other world to open peace negotations. Yōji Itami is one of the Japanese officials sent to investigate the other world, where magic, dragons and elves are real, using his knowledge of fantasy stories to make his way in this new environment." (Wiki) 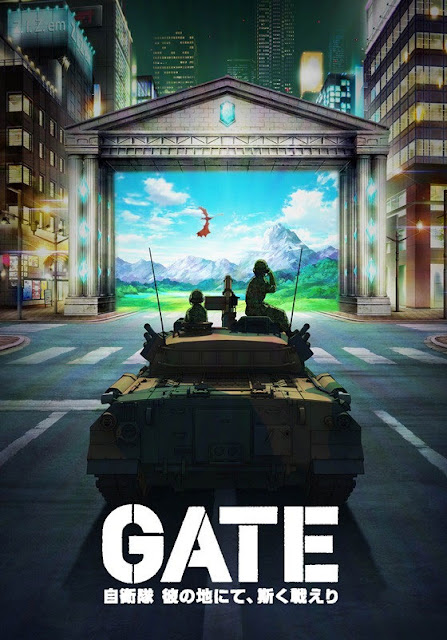 Modern Japanese soldiers cross into a world filled with fire breathing dragons, Gothic Lolita-wearing oracles and blonde elves and sorcery, thru The #GATE and finds a world beyond their comprehension ... But slowly they will begin to know two things are the same in anywhere in the universe: "Humanity" and "Politics" ... #Anime

Plot Summary: "In August of 20XX, a portal to a parallel world, known as the "Gate," suddenly appeared in Ginza, Tokyo. Monsters and troops poured out of the portal, turning the shopping district into a bloody inferno. The Japan Ground-Self Defence Force immediately took action and pushed the fantasy creatures back to the "Gate." To facilitate negotiations and prepare for future fights, the JGSDF dispatched the Third Reconnaissance Team to the "Special Region" at the other side of the Gate. Youji Itami, a JSDF officer as well as a 33-year-old otaku, was appointed as the leader of the Team.

Amid attacks from enemy troops the team visited a variety of places and learnt a lot about the local culture and geography. Thanks to their efforts in humanitarian relief, although with some difficulties they were gradually able to reach out to the locals. They even had a cute elf, a sorceress and a demigoddess in their circle of new friends.

On the other hand, the major powers outside the Gate such as the United States, China, and Russia were extremely interested in the abundant resources available in the Special Region. They began to exert diplomatic pressure over Japan. A suddenly appearing portal to an unknown world—to the major powers it may be no more than a mere asset for toppling the international order. But to our protagonists it is an invaluable opportunity to broaden knowledge, friendship, and ultimately their perspective towards the world." (www.gogoanime.com)