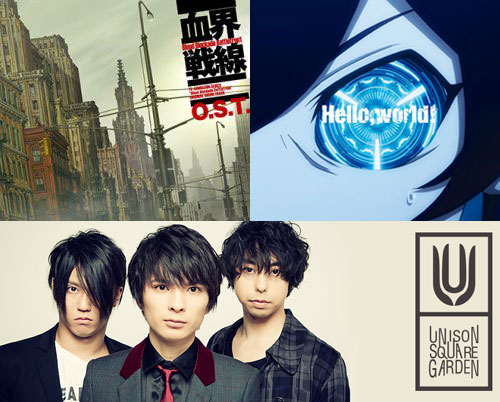 As I grapple (still) with words worthy of a introductory feature-post here on iNotOtaku!, I've since posted music videos on my music-themed TUNES TALK blog, featuring Opening & Ending Songs and a preview of 5 tracks from the upcoming OST / soundtrack to the first season of anime "Kekkei Sensen" AKA "Blood Blockade Battlefront"!

Meanwhile, featured below are the animation versions, featuring "Hello, world!" by Bump of Chicken for the Opening, while "Sugar Song to Bitter Step" by UNISON SQUARE GARDEN closes the show.

Kekkai Sensen Ending (Sub español) by ArandaUchiha
I absolutely LOVE the characters dancing at the End credit sequence, as it describes their characters in more depth than folks might realize, well at least it think it does! Zapp and K.K are my favs, actually … and so enjoyable to see Leonardo having "fun", as we don't see him that way much in the anime…

One of the thrills in #watching #KekkaiSensen is the closing credits when everyone dances on "stage" and Is something always look forward to, even tho ironically it also meant the end of the week's episode too ... :p #Sundayanimetrip #BloodBlockadeBattlefront