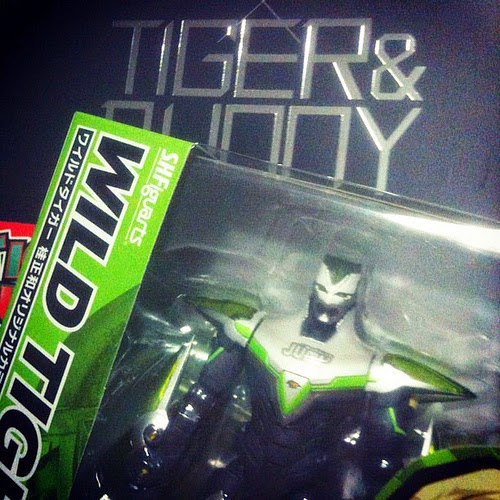 With the book itself reviewed in an earlier post, here is a closer look at the Wild Tiger Masakazu Katsura" Original Color Version articulated figure, that came along with the "Tiger & Bunny Groundwork & Rough Picture Limited Edition" (which I purchased online at a sale, item no longer listed so there's no URL to post, sorry) - comparing it next to another box from S.H.Figuarts for yet another version of WILD TIGER.

Frankly there are no specific figure differences besides the graphics on the figure surface LOL … I'll take a closer look at the figure itself in another post (I need to dig them out of storage first LOL).

This edition features a "Young Jump" logo on the chest (instead of the SoftBank" logo) and does not include the "Good Luck Mode" attachment.


I actually chanced upon the other Wild Tiger figure at a local anime festival, and purchased it with the intention to keep it as a memorabilia of the event … but shortly after I tracked down the anime series, binge-watched it, then fell in love with it, and have been buying T&B toys ever since LOL

OTAKU-DECLARATION: It is my sure aim to collect ALL T&G figures from them!

Meanwhile, back to box-to-box image comparisons :)