I actually can't decide if I like "Gatchaman Crowds" yet, having viewed the first episode only just last night, where folks are introduced to this new concept and re-envisioning of the classic "Gatchaman" - now seen thru the eyes of new recruit, "Hajime" (who has a fetish for note books, and is so weird and ditzy, I love her!). 
WHAT-IS: 'The series takes place in the early summer of 2015 and is set in the city of Tachikawa, Japan. A "second metropolis" of Tokyo, Tachikawa is populated by people known as Gatchaman, who are warriors that fight in special reinforced suits that are powered by the manifestation of spiritual powers of living beings called NOTE. A council has recruited individuals that have latent powers to help fight alien criminals. In recent years, the council has appointed the Gatchaman Crew (G-Crew) to fight the mysterious entity known as MESS." (via Wiki) so far 3 Gatchaman armors have been "revealed"! "Gatchaman Crowds" is produced by Tatsunoko Production (the studio that also produced the original series), with the first episode began airing on July 12, 2013 (and is being simulcast by Crunchyroll). There are 12 episodes in the first season.

Having had the opportunity to start this series from the ground up, I will be looking forward to be seeing a few more episodes of this newly fangled and unrecognizable notion (but for the classic Gatchaman-logo being used), before I dedicate my attention to this "new" obsession hahahaha

Besides the anime, someone NEEDS to be making these armored characters into TOYS! (Reminds me of the awesome "Tiger and Bunny" action figures from Tamashii Nations x Bandai ~ *hint-hint*).


Below: A look at CAGE; Gatchaman's HQ lair (The above first published on TOYSREVIL circa July 2013) 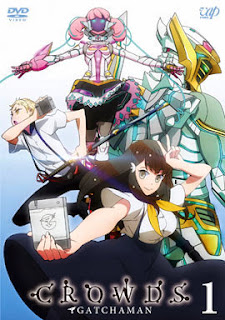 GATCHAMAN CROWDS ended it's first season on episode 12, and I am frankly left somewhat perturbed and ultimately unimpressed. Not that I abhor any ill-will towards re-envisioning, but perhaps this would serve better if not viewed in reference to the name-sake, IMHO.

The storyline waned somewhat in the middle, and picked up steam near the end, most possibly because we get to see all Gatchaman suits in action (as short as they were featured), even the series villain "Berg-Katze" got to show it's! Still would not mind it if they were made into action figures tho ;p