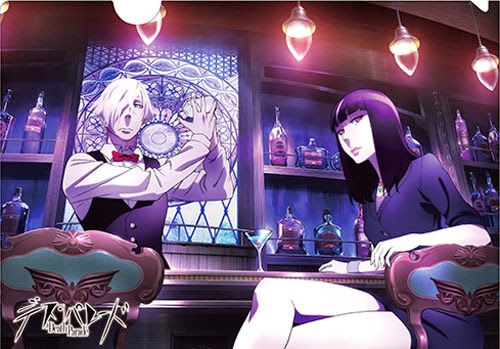 To say DEATH PARADE is "morbid" might well be an understatement and as well highly dismissive at the same time. It is likened to an "exploration" into the human condition, with each episode leaving you to ponder the essence of humanity at the show's end, is refreshing, methinks.

I am reminded of a live-action Japanese feature film "After Life" (circa 1998), whereby the recently dead transition to a "waystation" / holding dimension before moving on to "Heaven". The folks have a week to choose, and film a single memory which they would bring along with them to the afterlife, where they would forget everything else in their previous life in the mortal coil, thereafter.

The film came at a point in my life where I had felt cinema and filmmaking was my "life". Career-wise it has since changed, but my fondness for the film, and it's concept, remains still to this day. 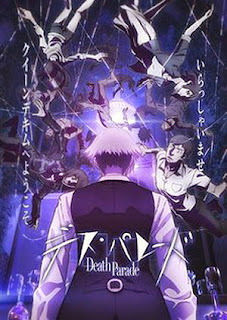 "Death Parade" essentially possesses a somewhat similar premise, whereby the dead visit "Quindecim", and engage in a "randomly chosen" game between two (dead) persons, with a summary "judgement" passed to them at games' end, with them going to either Heaven or Hell.

The viewers are never told (so far) who goes where, and it is up to whomever watching the anime, to make their own judgement - hereby making us the "arbiters" as well, it seems.

Imagine a reality-TV "competition"-styled show, where YOU become an "armchair judge", doling out your own opinions about who "should have" been picked or chosen LOL ... And would imagine how much the series would go, if ever they decide to "interact" with viewers of the anime, and letting viewers "decide" who goes to purgatory or revel in nirvana ... 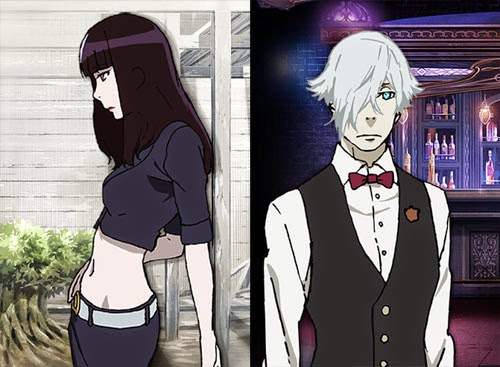 DEATH PARADE PREMISE: "Somewhere is a mysterious bar known as the Quindecim, where a lone bartender named Decim works. Whenever two people emerge from the bar's elevators, those two must participate in a Death Game with their lives on the line, the results of which will reveal what secrets led them there and what their fate will be afterwards."

The "games" engaged in each episode is different from the next, with so far "arcade", "darts", "bowling" and "billiards" played thus far. Episode 2 (embedded above) explains the premise pretty much, so try not to miss that if you intend to carry on with the conceit.

I like that each episode has it own resolution, and while there is an underlining thread / story to be told for the Arbiters and the folks running the place - i am not in need to know them so far, and would choose to go for the ride. Pretty non-committal "entertainment" thus far, and to be a definite boon, in lieu of "regular" animes where you need to invest time, patience and understanding to "get the entire picture", IMHO.

It was the 2013 animated short movie "Death Billards" (embedded below) - created, directed and written by Yuzuru Tachikawa (produced by Madhouse for Anime Mirai 2013) - that had led to the anime series "Death Parade" (デス・パレード Desu Parēdo?) which began airing on January 9, 2015. (Wiki).

Check out the show's official webpage @ www.deathparade.jp for more images and info (in Japanese language).